Indian Cinema lost one of its greatest contributors on December 23rd 2014, K.Balanchander or KB sir as he is fondly known to many. The recipient of the Dada Saheb Phalke award, his career spanned for over 45 years. Besides directing over 100 films, he has also donned the role as writer, producer and even an actor. Each of his films were ahead of its times with radical offbeat themes and with strong women characters. The same was true with the many serials that he had directed and produced for the small screen. He is known for launching and mentoring several top actors and technicians in Indian Cinema including Kamal Hassan, Rajnikanth and Sri Devi.

Here is what the national newspaper The Hindu  has to say about this great man.

As our small tribute to KB sir we would like to share a lobby card from our collection. It is from the film Manadhil Uridhi Vendum (1987). The film revolves around the strong willed female protagonist Nandhini (played by Suhasini) who over comes many hurdles  and finally dedicates her life to her profession as a nurse.

The lobby card in itself is unique with the working still from the shoot as its image. We get to see the crew and the man himself directing the female lead Suhasini in this picture. 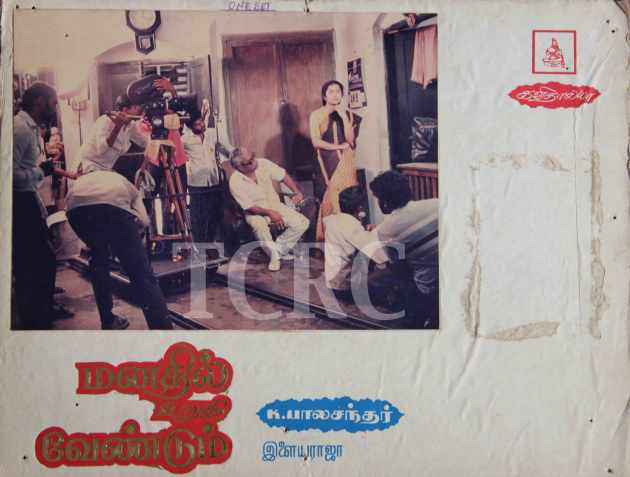