An edition showcasing short films and film makers from the city of Chennai. IndiEarth OnScreen in association with The Cinema Resource Centre, Chennai present a collection of short films depicting the flavour and essence of Chennai and it’s people. Features a mix of documentary and fiction, the shorts portray definitive and hidden nuances of the populace as a whole that put together the fabric of the city.

The evening will also feature a conversation with the filmmakers as well a Q&A with the audience hosted by IndiEarth.

Gaana songs are a sub-culture of Chennai urban culture.

Gaana in simple words is another name for Tamil Rap song (s), which is getting transformed into a viable commodity by entering the market and undergoing a process of sanitization. It comes across at issues like Politics, urban poverty, caste, violence and sex.

Gaana songs came into existence as part of the urban culture and it has its roots in the slums of Chennai. The Gaana as a popular cultural form is distinct in structure, rhyming verses while talking about the loves and lives of the slum people.

Gaana comes from a mixture of different Tamil dialects and other languages the Dalits, fisher folk of Chennai encounter.

Gaana undoubtedly gives a cultural identity to Subaltern masses in the fringes of the urban spaces. Gaana singers do subtly make music whose effect is to challenge and undermine the consequences of poverty and marginalization.

Often, we find that certain moments from our past are etched deeply within our memory. They are brought to life sometimes by certain harmless innocuous happenings such – a name, a picture or a song. This short film is about such an event, where a name triggers a memory that resides deep within the protagonist. This memory of his spurned love, Janani, enriched by her blissful dance to a classic film song, taunts him. There is a sudden stir in the protagonist to relive the moments, by playing the classic song that was of paramount importance to him and the memory. What happens next is an unexpected coincidence.

Santhosh Kumar, a 5th class student of a government school in Chennai, spends time collecting empty bottles for money and huffing correction fluid for recreation. His naïve encounters in the real world only reveal him to be ignorant and in need of help.

Children of the Republic is a series that provides a glimpse of the dark and dangerous path some of our youngsters have stumbled onto.

Meelpaarvai is a romantic drama about love, relationships and retrospection. “Meelpaarvai” is a Tamil word meaning “Retrospect”.

Karthik and Divya are ex-lovers, who haven’t met in the last three years. One fine day, Karthik receives a surprise call from Divya, who is now married, to meet her at the same coffee shop where they last met three years back.

Helmet thirudargal is a short film on Helmet awareness. The awareness delivered through comedy genre.

This film is to appreciate the beauty in day to day life that goes unnoticed due to the fast paced lifestyle of our generation.Life in Madras is beautiful.Embrace It.

The Cinema Resource Centre (TCRC) is a not-for-profit public archive of Indian cinema designed to enable research on the audio-visual cultural artifacts produced by Indian films, especially those made in the regional languages of South India.

We seek to promote film culture, from a historical, educational, and artistic perspective.

The artifacts pertain to various Indian films that have been released over the last 80 years. They have been sourced painstakingly from collectors, films producers, technicians, artistes and fans.

We’re a small team and our passion for cinema is the only thing that sustains us.. 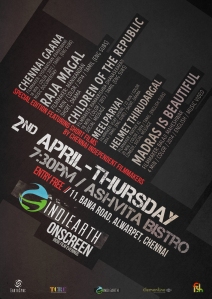