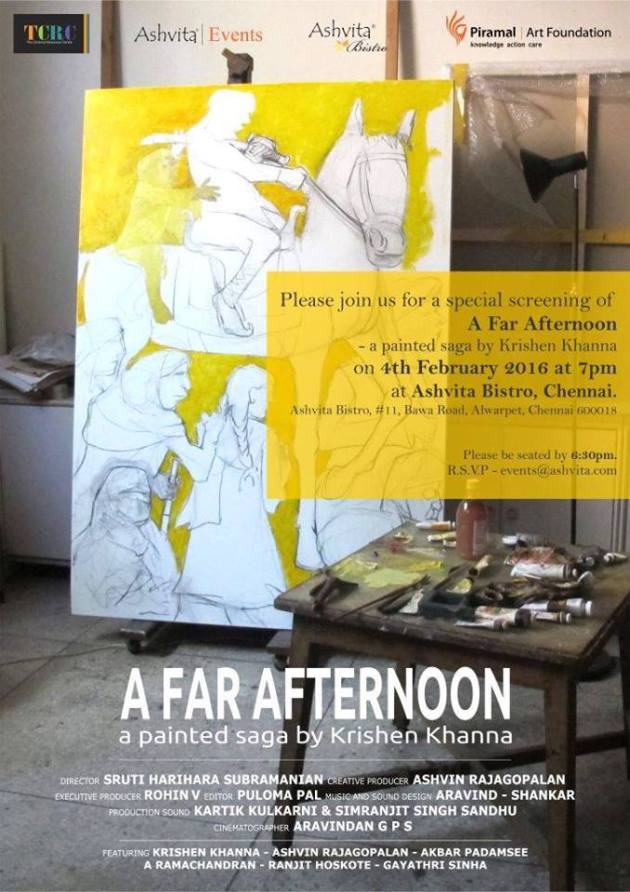 A Far Afternoon – A painted saga by Krishen Khanna is a documentary directed by Sruti Harihara Subramanian ( Film maker & founder trustee of TCRC ).

Krishnen Khanna is one of India’s most prolific and influential artists. Born in Faislabad (Pakistan) in 1925, and raised in Lahore, the artist and his family moved to Shimla in India during the partition in 1947, a fact that deeply impacted his view on the world. Atypical of artists in the 1940s and 50s, Mr. Khanna was a full-time banker and a part-time artist; his job brought him to Mumbai and into the fold of India’s Progressive Artists Group, giving him the impetus to relinquish banking and give into the all-encompassing life of an artist.

In April 2014, at the age of 89, Krishen Khanna set out to create a new art work. It is not often that one is permitted into the mind of an artist, into the thought behind every brush stroke, every choice of figure and colour. As we filmed, we watched the five panels of the painting develop and become a life-like rendition of a marriage procession.

Art freezes a series of moments in time. To hear Krishnen Khanna describe the influences behind A Far Afternoon, it is obvious that the piece has been influenced by memories collected over time, discrete images lodged in the artist’s mind and more nascent, less visible thoughts and ideas that dictate the choice of figures and colours. A film in five parts, A Far Afternoon, delves into those influences that eventually rendered themselves on canvas. Bombay, the city in which Krishen Khanna was inducted into the Progressive Artists Group; the baraaat (wedding procession), a constant in Indian weddings; the choice of colours, yellow, blue and whites; other artists, other art works that have brought him to this place and point in time.
A Far Afternoon- a painted saga by Krishen Khanna is a filmmaker’s attempt to memorialize the artistic process involved in the creation of the eponymous art work, and trace some of the influences of the artist.

To know more about the film visit: http://piramalartfoundation.com/afarafternoon/