A picture of the Lobby card of Karnan from our archives used int this article. 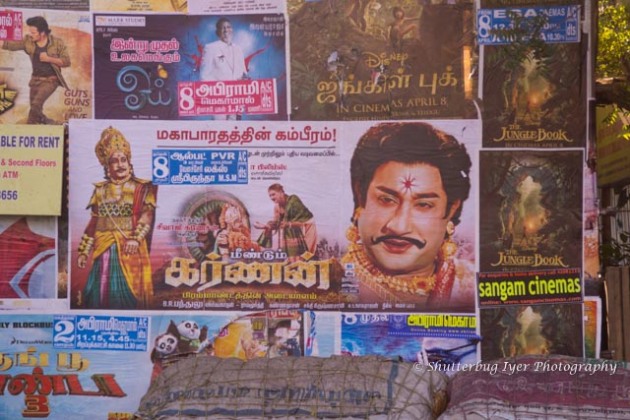 Is it possible for the internationally acclaimed, Walt Disney produced, John Favreau-directed Jungle Book to lose out to a Tamil movie originally released 52 years ago? The answer is ‘yes’ if you consider the wall space for the posters in Chennai.

In the picture above, taken during a Photowalk in Purasawakkam, the poster of Tamil movie Karnan dominates the wall dwarfing Jungle Book.

Karnan,  based on the eponymous character in Mahabharata,  was directed and produced by B.R.Panthulu and released in 1964. As first-year engineering students, we used to utilise our library / seminar hours  to see Sivaji Ganesan, N.T.Rama Rao , Asokan, Devika and Savitri  in action in the theatres. The songs penned by Kannadasan and set to music by Viswanathan – Ramamurthy are still favorites after 52 years.

A damaged Lobby Card of Karnan (1964) carefully archived by TCRC. NT Rama Rao as Krishna and Muthuraman as Arjuna.