Animal magnetism is so profound that Humans have always been fascinated by them. Wild animals have long inhabited the depths of the human imagination no less than they have occupied the natural habitats of our shared planet. The Fauna had not spared even the Mythology as Indian, Roman & Egyptian folklore is aplenty with animal characters.

As a reflection of the natural inquisitiveness & keenness of humans about animal world, movies too have been featuring various animals, big & small, since long.

Hollywood’s Silent era movie “Ben-Hur–A Tale of the Christ” (1925) is said to have been the ultimate in animal cruelty in a film, as over a hundred horses apparently gave their lives to complete the climactic chariot race scene. The injured animals in the film were reportedly shown little mercy. Below is the famous chariot race in Ben-Hur (1925)

We have to discuss here in vivid as to how the filming was done with flocks of birds that “acted” in Alfred Hitchcock’s celebrated film ‘The Birds’ (1963), a supernatural thriller, featuring birds as violent rebel against humanity. This writer fondly recollects watching this very Movie during his college days at the Sahni’s Theatre in T. Nagar in 1963. 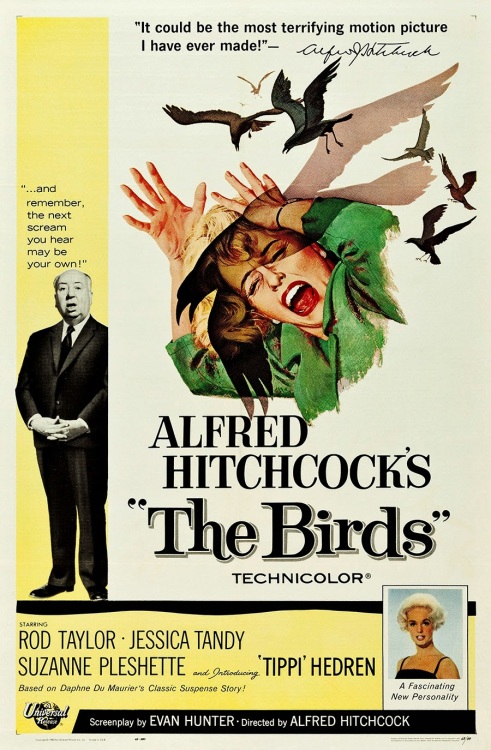 Inspired by Daphne de Maurier’s short story “The Birds”, first published in a 1952 issue of ‘Good Housekeeping’ magazine & also a real life incident at Cornwall, England where a farmer and his wife survived an inexplicable attack by a flock of birds, Hitchcock thought of filming ‘The Birds’, intrigued by the sheer idea of birds turning murderous. The movie, financed by Universal Pictures and filmed on Bodega Bay near San Francisco, is considered amongst the most scary-movies.

When Hitchcock first discussed with his Art Director Robert Boyle, who was tasked with developing means of shooting scenes birds attacking humans, the plans were to deploy mechanical birds. But it resulted in utter failure, after spending great amounts in developing a variety of mechanized and prop birds, as the test footage showed them to be unconvincing and ridiculous. The film was therefore forced to rely on live birds, either trained to ‘act’ alongside human actors or superimposed into pre-shot footage via what are called ‘composites’, using a ‘sodium vapour’ process as an alternative to the normal blue screen method, as supervised by the award winning Animation Expert Ub Iwerks of Walt Disney Studios. 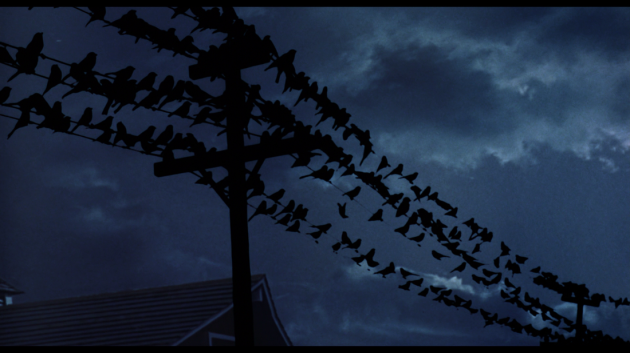 A still from The Birds .PC: Unknown

The Unit shot special footage of seagulls at the San Francisco city garbage dump, which was used for reference material by the special effects team and as cutaways in the film itself.

The unit of ‘The Birds’ kept the live birds housed & fed in forty large pens in the Studio, for the movie’s shoot, under the watchful eyes of a member of the American Humane Association. It is reported, despite that numerous questionable practices, including tranquilizing birds to keep them within the frame and reportedly using wire to tie the beak shut of birds did happen. Animal Trainer Ray Berwick was fined by authorities to have captured more wild birds than was the limit, besides having to release the birds that exceeded the permit. Understandably, It was very tough dealing with the birds as they were non-cooperative performers. Several weeks into production, incidents of bird-inflicted injuries became commonplace that the entire production team had to be given anti tetanus shots as a precaution.

In one sequence in the film, about fifteen hundred small birds like sparrows and finches were poured down a false chimney and into the set, when the set was closed off with plastic sheeting to prevent the birds from flying up into the lighting rigs above. For those few birds that did escape, they used liberally scattered birdseed across the floor to entice & recapture them. One actor recalled when the birds would just swoop down the chimney set and realize that there was nowhere to escape they just dropped in the confined areas. That while recording the shot the cast were warned to shuffle their feet to the extent possible, to avoid stepping on and killing any of the birds.

The birds tied to their trainers with thin cords were propped towards meat placed near the camera position to induce them to fly towards it. When that did not prove frightening enough trained birds were encouraged to land on the heroine and she would then bat them away. Once it became clear the birds were not landing on her with another enthusiasm and were instead flying around the set, air jets were used to force them back in her direction. By the middle of the week stagehands were resorted to simply throwing crows and gulls at Hedren, and by the end of the week Hitchcock had live birds attached to Hedren’s costume with elastic bands.

Actor Rod Taylor claimed that the seagulls were even fed a concoction of wheat & whiskey, to get them to do so much as the Director expected.

In fact, the young debutant heroine Tippi Hedren had been reassured on multiple occasions that a particular sequence would only feature mechanical props in lieu of live birds. But that turned out to be a lie. She once recalled in an interview as to how ravens, seagulls and pigeons were hurled at her, one by one, by Bird Trainers.

The scene in which the heroine watches the birds attacking the villagers was filmed on the sets from a phone booth, When the heroine opens the door of the phone booth, the seagulls that were trained by Bird Trainer fly into the booth.

The film’s final shot was a complex affair, combining both live and puppet birds requiring 32 separate film exposures to create, and was widely cited by Hitchcock as the single-most difficult shot of his career.

Bollywood does not lag behind either, when it comes to casting animals in films, though not in the scale & efforts of ‘The Birds’. Some of the lovely animals have stolen our hearts in Hindi films, like the Bull Mastiff Dog named Pluto in the recent “Dil Dadkane do”.  And there have been Doves, Swans, Ducks, Deer, Peacocks, Elephants, Horses, Snakes and whatnot which have routinely featured in many a movie in the past. Who can forget that popular song, ‘Kabutar Ja Ja’ filmed on that courier pigeon & its employer heroine! Even stars as big as Rajesh Khanna had to share their screen presence with performing animals as you may see in this video sequence from the film “Joroo ka ghulam’ (1972).

In old Tamil films of mythological or historical subjects, the sets routinely featured, even in romantic settings, deer, pigeons & peacock giving constant company to the heroine & her sidekicks. Kodambakkam had its own animal suppliers whether the scene involved a snake let out by the villain or a monkey to assist the hero with odd jobs. Those days, prior to the advent of strict regulations on animal usage, there used to be hearsays that the snake suppliers to films even stitched up the reptile’s mouth! In some of the early films even stock shots of animals were used. This meant that instead of actually filming an animal especially for a scene in the given film, they used to buy out shots, which are called library shots or stock shots.

The above scene, involving a Peacock as a romantic emissary was from Sri Valli (1945).

In the Tamil film “Ambikapathi” (1937) directed by the legendary American Film Director, Ellis R. Dungan, he created a scene where Chola King Karikalan makes a triumphant return into his capital after a successful campaign, in which a meandering line of caprisoned elephants was shown by him in a lengthy shot as the elephants pass through the frame in a slow paced procession, which was majestic.

The film ‘Sakunthalai’ (1940) begins with a scene where the hero (GNB) & his entourage are on a hunting spree. In this scene they are shown pursuing a Tiger, which was a stock shot.

Whereas, a lion cub featured in the same film ‘Sakunthalai’, directed by Director Ellis. R. Dungan, who adopted it after the shooting was over. According to Film Historian Muthaiah, Dungan used to keep his pet overnight in a cage in his room, but, during the day, tie it to a tree in the hotel where he stayed. But when the cub grew fast, it snapped his strap and ran after the hotel guests when the police had to intervene & asked Dungan to find a new home for the lion cub.