M.N.Rajam, born 1940, started as a stage actor when she was hardly seven years and debuted into Film with ‘Nalla Thambi” (1949) in the role of an orphan girl. This movie was written by C.N.Annadurai, produced by N.S.Krishnan & directed by the duo Krishnan-Panju. And before her fifteen years of age she had acted as a minor in as many as fifteen films, some of which were Pavalakodi, En Thangai, Ratha Kanneer, Kanavane Kan Kanda deivam, Mangayar Thillakam, Needhipathi & Town Bus. Since then she had acted with many leading stars of Tamil screen.

Rajam got married to the Playback Singer A.L.Raghavan in 1960. They have a happy family with their children & grandchildren well qualified abroad.

Kumari Saraswathi aka Sachu (born 1948) was another notable child star of early Tamil Cinemas. ‘Maadi’ Lakshmi & Bay Saraswathi were dancing duo in the fifties, the former being Sachu’s elder sister, with her “Maadi’ title referring to their upstairs residence opposite to P.S.High School in Mylapore.

Sachu debuted in the film ‘Rani’ (1953), at her five, by director A C Sami.  Sachu acted as the junior Bhanumathi in this film. Her next movie was “Sorga Vaasal”. Then more notable films such as Maya Bazaar, Avvaiyar, Shyamala followed where she acted along with many legends. In Avvaiyar she was the baby Avvai. The chubby-faced Sachu went on to fill the vacuum left by Baby Saroja.

Baby Sachu in Avaiyar PC: From the archives of TCRC

Her first film as heroine was “Veera Thirumagan” (1961) with Anandan, the father of Disco Shanthi. This movie, produced under AVM Banner, was directed by A.C.Trilokchandar, MSV-TKR scored music for this film & the duet ‘Roja malare Rajakumari’ from the film is evergreen to date.

Sachu had since acted in more than 500 films in five different languages and a few television serials. Her role pairing with the legend Nagesh in Sridhar directed ‘Kathalikka Neramillai’ was superb. After this, she did several comedienne roles along with major comedians such as Suruli Rajan, `Thengai’ Srinivasan, Cho, Thangavelu, M.R.R.Vasu and M.R.Radha in many films from 1964 to 1989. The late 1970s and 1980s saw her playing supporting roles in films Kamal & Rajani too. She moved on to the small screen in the 2000s and has starred in many serials & stage plays.

The late Actor-Producer Balaje too entered films as a child star in Gemini’s Avvaiyar, donning the role of Lord Muruga. Balaje’s love for acting was right from his school days. In fact, Gemini Vasan identified him at one of his school dramas, before casting him in Avvaiyar. 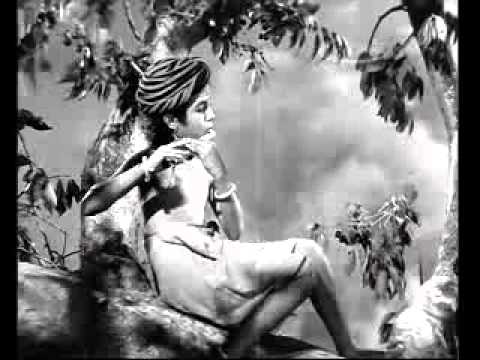 K.Balaje, in his early life, also worked as Production Manager with Narasu Studio (owned by Narasu’s Coffee people) at Guindy, where he became acquainted with Gemini Ganesan, Savitri and Sivaji Ganesan. He also ran ‘Balaji Nadaga Mandram’, which served as a launch pad for many veterans including Nagesh. He founded Sujatha Cine Arts & Sujatha Recording Studio. He was well known for remaking blockbuster movies from Hindi. Balaji, whose daughter is married to Malayalam Super Star Mohanlal, passed away in 2009.

The late Sukumari was a veteran actor with great track record both In Tamil & Malayalam screen.  But she debuted as a child star at her ten in the AVM produced Tamil film ‘Oar Iravu’  (1951) as a dancer in a cameo role in the initial part of the song ‘Vasantha Mullaiyum malligaiyum’ in the music of R.Sudarsanam, as featured in the video below.

Sukumari was a cousin of Lalitha, Padmini & Ragini, popularly known as Travancore Sisters. She again appeared in ta dance sequence much later in the film “Pasa Malar’ in the song “Vaaray en thozhi varayo” as an youngster.  She also used to act in Cho’s plays in the sixties. Her very many stellar roles in Malayalam screen are ever memorable.

One can easily equate her to the late Thespian Manorama of Tamil screen. Sukumari succumbed to third degree burns in 2013.

The dancing star E.V.Saroja debuted, as MGR’s kid sister, in the Film ‘En Thangai’ (1951), which was later remade in Hindi as ‘Choti Bahen’ by L.V.Prasad.

An image from the film “En Thangai”

Further her performance in the films ‘Gulebakavali’, ‘Veera Thirumagan’ & ‘Madurai Veeran’ were notable ones. In all, she had a track record of acting in some forty films & dancing in about a hundred films. She learnt Bharathanatyam under the famous Guru Vazhuvoor Ramaiah Pillai. She also choreographed dances. She was married to popular film producer and director T V Ramanna. E.V.Saroja passed away in 2006 at her seventy.

Daisy Irani, a Parsi girl child from Bombay film Industry was imported into Kodambakkam to play a crucial child role as a cute & smart boy in the Tamil Film “Yaar Paiyyan” (1957), screen-played by Sridhar, based from a well-known Bengali story, ‘Sekelar’. Daisy Irani, along with Gemini Ganesan & Savithri, contributed to the success of this film and Daisy Irani instantly became the darling child artiste of Tamil Cinema goers. “Yaar Paiyyan” was directed by noted filmmaker T.R. Raghunath, in the music score of S. Dakshinamurthi. 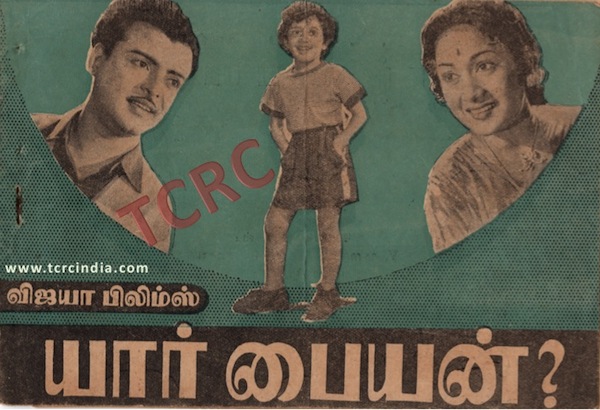 Song Book of Yaar Paiyan PC: From the archives of TCRC

However, Daisy did not act in any other Tamil film as she got very busy with her Hindi Films at Bombay. In ‘Yaar Paiyan’ she had plum role along side even veteran Comedian N.S.Krishnan.

Born in a Parsi family of five children, as the little girl of just two-and-a-half years, Daisy Irani made her debut in a Movie as a male child. When Director Bipin Gupta was on the look out for a small boy to act in his movie, he spotted Daisy playing in her brother’s clothes and he mis­took her for a boy. Nevertheless it was a boy’s role. Much against the wishes of her conservative Parsi father who ran a Irani Café in Bombay, she was signed for her debut movie, duly fuelled by her mother. Then others like Satyen Bose & B.R. Chopra came forward and she became a hot property. As a ‘boy’ child star! Her first re­lease was the film Taksal.

Daisy Irani in an interview to Mumbai Mirror in 2012 recounted that she & her sister Honey Irani, having been thrusted into films, had no childhood, no education, as they couldn’t go to school. By the time they grew aware of their predicament, their childhood was gone. They made a lot of money, but got none of it, as their mother blew it all up. During her career as a child star, she said, the production staff used to physically abuse her by hitting & pinching if there was a need to cry in any sequence.

As Daisy Irani grew up the offers for cinema rolls as a child star stopped coming. Then she started doing stage shows.  By this time the movie. ‘Bachpan’ produced by her mother flopped incurring heavy in debts. The family lost their seven cars one by one.

At the insistence of her mother she acted as a heroine in Gujarati and Punjabi movies when she was hardly 14 years. However, to get a break in Hindi films was very hard, as she was known for her roles as a child star.

Then she fell in love with Director K.K.Shukla and got married to him. Following that she started her own successful Acting School in 1990.  Films such as Aakhen, Katti Patang, Talash, Arzoo are some of her works before she quit film scene.

….. and so, the legacy of Child Actors continues in our films.