T S. Baliah, villain, comedian & character actor of the Tamil Screen of the yesteryears too started as a stage artiste in ‘Madurai Balagana Drama Company’ run by ‘Yadaartham’ Ponnusamy Pillai. He debuted his cinema career with Ellis.R.Dungan directed ‘Sati Leelaavathy’ (1936) as a villain.

Baliah mostly appeared in films as a villain, along with Heros such as P. U. Chinnappa & M.K.Thyagaraja Bhagavathar. Whereas in Modern Theatres produced movie ‘Chithra’ (1946), directed by Raza Wahab Kashmiri, Baliah was cast as hero with Vasantha pairing with him as heroine. However, as per Randor Guy “the movie did not do well mainly because of the wrong casting of Balaiah, who was famous for his roles as villain, as the hero.”

T.S.Durairaj, one of the talented comedians of Tamil Cinema, was a contemporary of N.S.Krishnan with whom he often teamed on screen, though he came to lime light as a solo comedian later. He even donned comedian roles in films like ‘Meera’ & ‘Sakunthalai’ where M.S.Subbulakshmi starred. T.S.Durairaj too began with stage acting with one of the Boys Companies of his times.

As per Randor Guy, Durairaj’s acting prowess was such that during the shooting of a sequence with Durairaj on Adyar River for ‘Sakunthalai’ by the celebrated Director Ellis Dungan, its heroine M.S.Subbulakshmi could not control her laughter at the sequence, involving retakes. Such was the impact of Durairaj’s acting.

If we do not cover here about T. K. S. Brothers, who were a formidable name in Tamil stage, it would not be fair. The brothers comprising Sankaran, Muthuswamy, Shanmugam, and Bhagavathi were initiated as young boys into acting. The first three brothers joined Sankaradas Swamigal’s ‘Tattuva Minalochani Vidya Balasabha’ in 1918 and & received high acclaim from the Swamigal. After their stints, later, with the troupes of Krishnaswamy Pavalar and Kandaswamy Mudaliar, In 1925, they formed their own ‘Bala Shanmugananda Sabha’ in Madurai & staged their maiden play, ‘Gumastavin peNN’, which was filmed as Clerk’s Daughter in 1941. Other popular plays from them were Avvaiyar, Rajaraja Chozhan, Manidhan, Andaman kaidhi, Uyiroviyam, Kalvanin kadhali, Ratha Pasam and Tamizh Selvam. 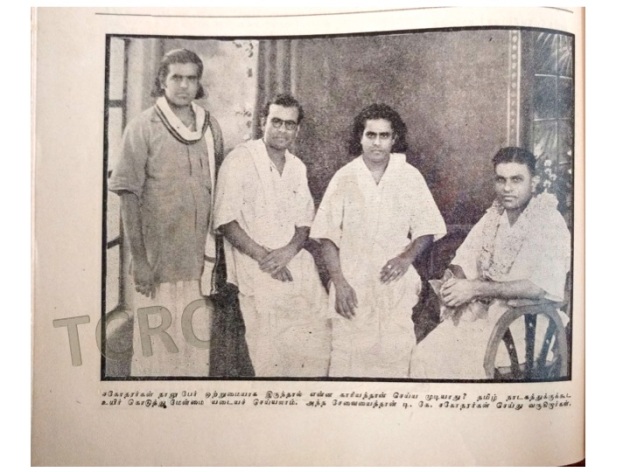 A picture of the TKS brothers in Kalki Deepavali Malar 1942 PC: From the archives of TCRC

In 1950, they renamed the company as ‘T. K. S. Nataka Sabha’. The members of their Drama Troupe included big names such as N. S. Krishnan, S. V. Sahasranamam, K. R. Ramasamy, S. V. Subbiah, T. N. Sivathanu, A. P. Nagarajan, S. S. Rajendran, M. S. Draupadi, M. N. Rajam and even Kamalahasan. Their plays, for the first time, introduced female actors on the Tamil stage & toured India and abroad, staging over seventy productions between 1925 & 1972. Many of their plays were made into cinema.

Another singing star of the early Tamil cinema was K.R.Ramaswamy whose contribution to Tamil screen cannot be overlooked. He too started his career in theatre at a tender age of eleven when he joined Madurai Original Boys Company. While being there he met great actors such as P. U. Chinnappa, M. G. Ramachandran, Kali N. Rathinam & N.S.Krishnan. Later in 1928, he joined TKS Brothers’ ‘Sri Bala Shanmuganandha Sabha’. In the stage play “Menaka’ he was the ‘heroine’ as he donned the female role.

K.R.Ramaswamy’s debut film was ‘Gumasthavin Penn’ (1941). Subsequently, he set up his own Drama Company ‘Krishnan Nataka Sabha’ & staged, in 1946, C.N.Annadurai penned Play ‘Velaikaari, which performed at Tanjore for a full long year. When the same was made into a movie in 1949, KRR played the hero thereof.

However, KRR continued his stage career much after he became a popular screen hero too, staging the play ‘Oar Iravu’, also written by Annadurai. He was also in the film version of the same story. It would be interesting to note that Sivaji Ganesan played the female role in KRR’s play ‘Manohara’ (which was made into a film later, where Sivaji Ganesan played the lead). KRR passed in 1971, after a film career of twenty five films.

While talking of Tamil stage of fifties and before, it would be incomplete if we do not mention about T.S.Rajamanickam Pillai (TSR). Nawab T.S.Rajamanickam Pillai was a product of Kannaiah Company. He ran his own drama company called  ‘Madurai Devi Bala Vinodha Sangita Sabha’. Sakthi Nataka Sabha was an offshoot of Sakthi Nataka Sabha, in whose plays Sivaji Ganesan acted in female character and became very popular.

In 1927, TSR played the Nawab in his play on ‘Bhakta Ramdas’ due to which his own name got the affix of “Nawab’ as an unique identification. He changed the conception by the elite that Tamil theatre was not respectable. TSR trained hundreds of pupils including some who became very famous actors on stage and screen.

TSR was popular for his mythological subjects like `Dasavatharam,’ `Sampoorna Ramayanam’ & `Ayyappan,’ complete songs and dances. In fact, widespread awareness of Lord Ayyappan happened in Tamil Nadu only sequel to the Ayyappan Play of TSR. Everyone knows that noted Tamil Film villain, (Late) M.N.Nambiar was a Spiritual person, making regular annual pilgrimage to Sabarimalai as ‘Guruswamy’. In fact, Nambiar started his maiden pilgrimage to Sabarimalai in 1942 with Nawab Rajamanickam as his Guru.

Of course, TSR did enact plays of social themes too. In one of these, where a wedding was shown on stage,TSR’s own Baby Austin was brought to stage as the wedding procession car! His plays used to be played on Wall Tax Road, next to Madras Central Station.

Nawab Rajamanickam’s company was popular for its magical spectacle, as It used science in presenting stunning visuals on stage such as  birth of Lord Krishna associated with pouring rain or the snake providing the infant Krishna protection from pouring rains. Even Pammal Sambandha Mudaliar regarded the company of TSR with utmost regard. In 1934, Mahatma Gandhi blessed TSR on witnessing his Nandanar Play at Coimbatore.

But TSR was unable to keep the show going beyond the late Fifties. He passed away in 1974.

You will, however, appreciate that this Article was not about the various stage artistes past or present. On the other hand, we have tried to highlight as to how the stage has influenced the Tamil Screen in its pristine years, by discussing some of the individual senior artistes in Tamil screen. If some of the stage to screen personalities such as S.V.Sahsranamam, Sivaji Ganesan, M.G.R, S.S.Rajendran, K.A.Thangavelu, A.Karunanidhi, M.N.Rajam & few more are not covered here, it was not by oversight. Just that, we will have occasion to discuss them as appropriately in different facets of our future Articles in this series, Filmy Ripples.

You would have observed that the initial subjects for Tamil cinema were mostly from Mythology, Epics & History, though there were social plays. And slowly subjects associated with Indian Freedom struggle were also brought in as film subjects. Later big production houses such as AVM & Gemini were in the celluloid business more & more experimental subjects were brought under the fold of Tamil Cinema. By mid forties, Social issues of the society too were gaining momentum to be depicted through films with stories & screenplays by tall personalities of the order of C.N.Annadurai & M.Karunanidhi.

This documentary made by Ellis Dungan is a rare find from the West Virginia State Archives. It showcases a typical South Indian village in the 1940’s through the eyes of this American film maker. A song and dance sequence has also been incorporated in this documentary.

TCRC is proud to house memorabilia pertaining to some of Dungan’s films.