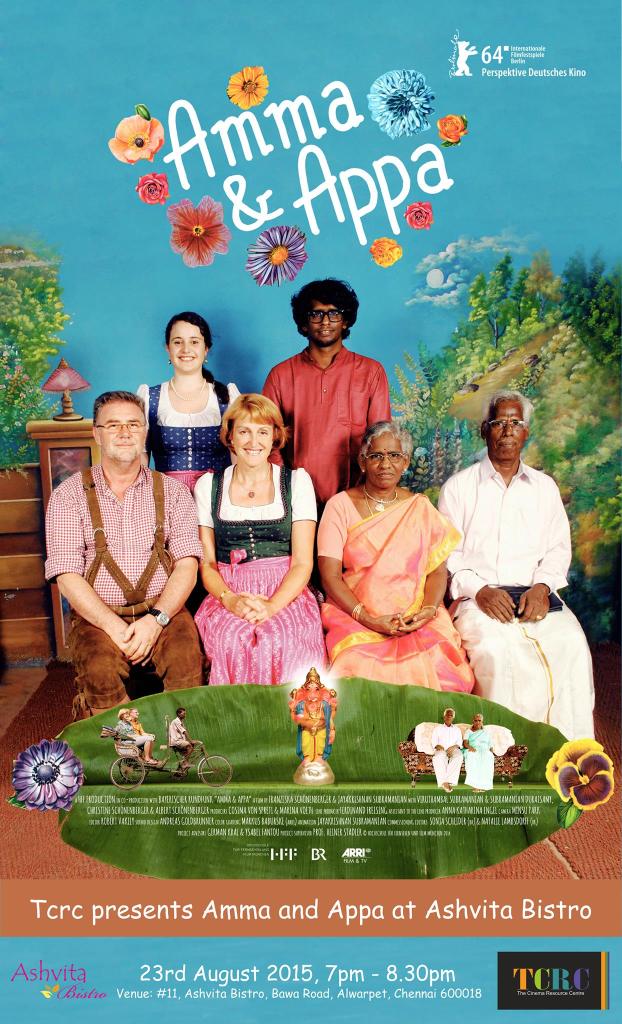 TCRC is bringing the popular documentary ‘Amma and Appa’ to Chennai on the 23rd of August 2015, Sunday at Ashvita Bistro, Alwarpet. This will be the first time that the film will be screened in Tamil Nadu. The film is in Tamil and German with subtitles in English. The film makers will be present for an interaction with the audience after the screening.

Amma & Appa (Tamil for Mother & Father) tells the story of film makers Franziska’s  and Jay’s parents. It is about their first meeting and of them getting acquainted. Both couples are about the same age and both have been married for more than thirty years. But they come from very different cultural backgrounds. Franziska’s live in the south of Germany, Jay’s parents in the south of India. They now come together because their children have fallen in love with each other and have decided to get married. For Franziska’s  parents it will be the first time they visit India and for Jay’s parents it will be the first time they receive foreigners as guests. While Franziska’s parents married out of love, the marriage of Jay’s parents was traditionally arranged. It was thus a great shock for them to learn that their son wanted to marry by his own choice. And what is more: A girl from Germany. His decision challenges their traditions and beliefs.

Against this backdrop the film unfolds its story. It tells the story of two cultures coming together and raises the universal questions what makes it all work- love, affection and living together. The film makers, as a young couple, want to know the recipe for a successful relationship from their parents and aim to find out with their  observation of the interaction of their parents toward and with each other.

Here is the trailer of the film: