Elephants have been used as attraction seekers in Tamil Cinema ever since a pachyderm called ‘Chandru’ played heroine, singing star Thavamani Devi’s (from Ceylon) accomplice in ‘Vana Mohini’ (1941). In this film, a rehash of a Hollywood ‘jungle’ movie , the story, screenplay and direction were by Hindi film actor and Director Bhagwan. The elephant virtually stole the hearts of all as he indulged in many tricks.

‘Sri Valli’ (1945), produced by AVM featured the elephant named Krishnan Kutty, sourced specially from South Perinkulam in Kerala, which is, by the by, also the village of this writer.

According to the well-known writer & film historian Theodore Bhaskaran The Gemini Studios resembled an elephant camp in 1948 while the Magnum Opus ‘Chandralekha’ was in production, as many elephants were in residence in the studio premises. He goes on to say “Two well known circus companies, Kamala Circus and Parasuram Lion Circus, camped in the Gemini Studio compound for shooting a film. At least one of them changed its name into Gemini Circus after the shooting of the film Chandralekha (1948) that Vasan was then engaged in, and in which the circus elephants were featured.”

In Gemini’s Avvaiyar (1953), a large herd of elephants were needed for a battle scene in the film and Vasan’s search ended in an elephant camp near Vayanad at Manandhavadi, which featured in the spectacular scene in which stampeding elephants attack a Fortress.

In the MGR starred ‘Gulebakavali’ (1955), there was a much publicized scene of MGR fighting with a live Tiger. However, there is no mention of the tiger’s name in its credit titles.

Now, I want to dwell in detail about exotic animal specie that featured in a Chennai produced Hindi Movie as early of the fifties.

Mr. S. S. Vasan of Gemini Studios who had produced grand movies praised as Magnum Opus made a Hindi movie in the fifties, starring Dilip Kumar, Dev Anand & Bina Rai. After shooting quite a footage of the film, when Vasan reviewed the same he felt an immense need to introduce an animal character in the film, which he felt was otherwise dull. After all, Vasan has had the benefit of featuring a bunch of elephants in his immediately preceding grand Tamil film ‘Avvaiyar’, much to the movie’s box office advantage.

Someone in his team suggested a monkey, which sparked an idea in Vasan’s industrious mind.  In those times, Chimps were often featured in many movies & TV Shows with ample fan following in the USA. One of such Chimpanzees, called Zippy was a star of his own right there. He is believed to have earned about USD 55k per month through his busy engagements in TV Shows, Night Clubs & other special events.

Living up to his reputation as India’s ‘Cecil B. DeMille’, the movie mogul, this time, turned his sights West and struck a deal to fly in Zippy, the Chimp, at a phenomenal price. Before the month was over, the chimp from Hollywood was on his way to India. Zippy, from USA, landed on a hot day in 1955, with his Trainer (Ralph Quinlan) & Owner (Lee Ecuyer), within a month, first At Santa Cruz Airport & then on to Madras Meenambakkam.

No ordinary monkey and being a bonafide American star, he was welcomed with a garland in Indian Tradition by Mohana, one of the Artistes of the film ‘Insaniyat’. Film India magazine reported about Zippy: “On arrival at the Santa Cruz airport he kissed Mohana and stuck to her till he departed. That proves that Zippy believes in cushioned comforts. So do many but they are not as fortunate as Zippy…”

The Hindu reported, “No star in recent times received such a tumultuous reception as was accorded to Zippy, the chimpanzee, at the Meenambakkam airport when he arrived with his trainer and owner”.

I recollect, I was in fifth standard, when Zippy took Madras City by storm. Gemini Studio was issuing special viewing sessions of Zippy to the public. VIPs & school children were accorded special ‘audience’ with the great chimp. Zippy was an instant hit with the Press as well as the crowds who had been awaiting his arrival. As a news report in The Hindu noted the next day, “the patience of the crowd was amply rewarded when they had the fun of seeing the chimp walk and do things like a boy, and shake hands with all those who wanted to do so. With close fitting dress and boots, Zippy delighted the people by his mannerisms”. For the short period of a month that Zippy stayed in Chennai, he received royal treatment. Lee Ecuyer, in a New York Times interview, recounted people “bowing at our feet as though he really was royalty”.

Zippy with S.S Vasan PC: From the archives of TCRC

As Zippy was small in stature, scenes featuring the chimp were reportedly shot slightly lower than eye level, so cleverly that the audience never realized that the action on screen was physically impossible for such a small creature. 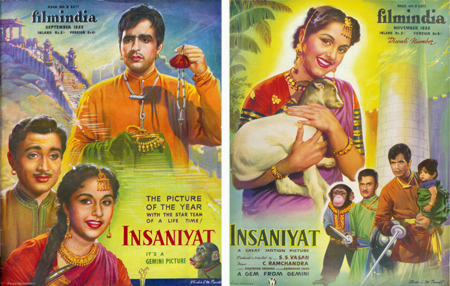 The lovable diminutive young chimp Zippy, trained & adept at playing piano, roller‐skating and typewriting, besides several other feats, was featured in not just one but two song sequences — “Beta Bada Hoga’ and ‘Main Hoon Bandar Shaher Ka’ in the film ‘Insaniyat’.

When the movie was at last released, Zippy was the Star, not the Bombay’s biggest stars, to the curious crowds. Their verdict was unanimous: the chimp had stolen the Show. It is learnt that as Zippy grew old, its owner found it difficult to manage it & donated it to The Bronx Zoo, New York.

Some sections also conspired that since the owner Lee Ecuyer had multiple chimpanzees with him for featuring in TV shows, it was not clear whether the very ‘Zippy’ who landed in “Insaniyat’ was the same celebrity who had appeared on popular American shows ‘Howdy Doody’, “The Ed Sullivan Show’ or ‘Cheeta’ of  “Tarzan’s Hidden Jungle”.

There was another chimp called ‘Pedro’ who acted in Indian film produced by Homi Wadia of Bombay who specialized in making Tarzan kind of movies in Hindi. In fact he produced a series of such films, which were also dubbed & released in Tamil.

Song book of the Tamil dubbed Hindi Film Zimbo (1958) featuring Pedro the CHimp PC: From the archives of TCRC

In South Indian film industry there was Sandow Chinnappa Devar who regularly featured animals in his films. His delightful Hindi movie ‘Haathi Mere Saathi’, extolling the loyal instincts of elephants for their masters, starred Rajesh Khanna and Tanuja.

There have been innumerable films in which animal species have appeared and it would be difficult to enlist all. Here is some of the cross section of movies with animal actors. Devar also produced Shatrughan Sinha‐Jaya Bhaduri paired ‘Gaai Aur Gori’ featuring a cow. The same film was remade in Tamil as ‘Aattukara Alamelu” replacing the cow with a goat. Thangamalai Rakasiyam (1957) had Sivaji Ganesan in a Tarzan­like character talking to elephants, which were picturised in Anamalai woods. Chinnappa Devar, who used extensively animals in his films, made Yanaipagan (1960) & Nalla Neram (1972), the later with M.G. Ramachandran as hero, both these films featuring elephants. Yanai Valartha Vanambadi (1967) & its inevitable sequel, Yanai Valartha Vanambadiyin Magan (1972) too had pachyderms in stellar roles. Even in Kumki (2012) an elephant featured as a main character. Film ‘Saivam’ had a Rooster in it, whereas ‘Kumudam’ had a Cat in it in the song ‘Meow meow poonai kutty’. Server Sundaram had a parakeet in the beautiful song ‘Thathai nenjam’. However, it was nota talking parakeet, as was presented in the sequence. The parakeet’s voice in the song was lent by, mimicry artist who worked with MSV, named Saibaba (one of the sons of T.S.Baliah).

Going forward too, the animal kingdom is sure to continuously attract the attention of film-makers throughout the world, for the simple reason that the animals are ever irresistible to people. The child in us would demand to see animals in films. However, the filming of animals in India is subject to certain regulations by the Animal Welfare Board of India. We only pray that the animals are not ill treated in the course of filming, as has been reported in the past.