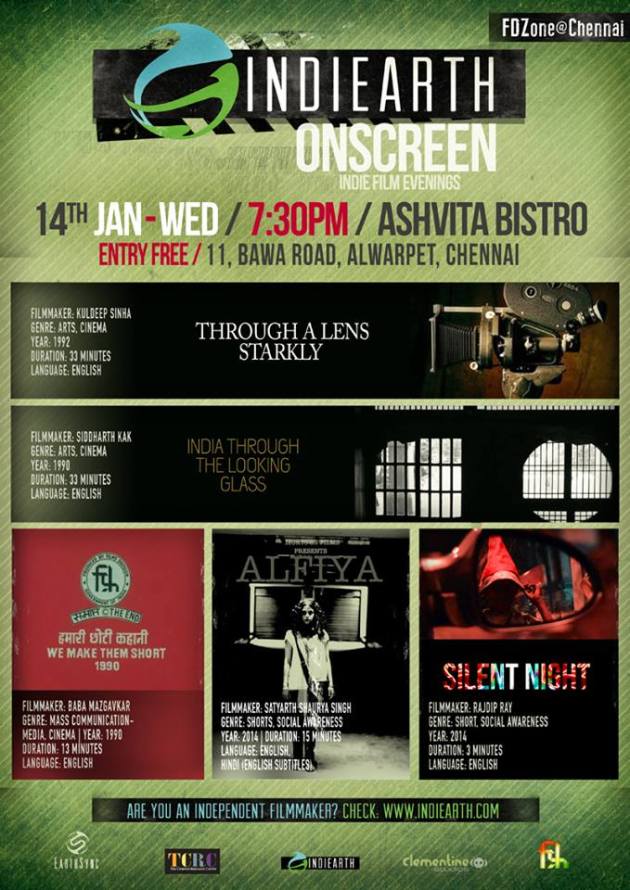 Indiearth and TCRC brings an Evening of Short Films:
A collection of freshly picked award winning films from the Films Division that speak of the various interesting nuances of short film making and documentary cinema; generating profound interest in captive audiences who are either new or seasoned non-mainstream film buffs.

Also included are 2 latest shorts by upcoming filmmakers of today. The screening will be followed up by a discussion led by IndiEarth on “Why short films and documentaries are important; to be made and screened to audiences”.

A film emphasising the importance of short films which generallyare not seen by the general audience. Short films can also beinterestingly made. It is through short films that cinema has undergone various innovations and experiments.

Here is a history of the Indian documentary film – from thecoming of cinema to India at the turn of the century to its present development. Excerpts of numerous documentaries areincluded. This is was the opening film at the Bombay International Film Festival

This is a film that explores a single day in the life of it’s protagonist, Alfiya. The film follows an indefinite progression: an oscillation between the social world and the inner life. Alfiya, a young girl in her twenties, grapples with blurred lines of perception which as likely stem from a ‘ delusional disorder’, or a phobia, to an unshakable dream state.

Christmas is the season of joy and giving. But amidst all the happiness and brightly coloured lights are the hidden pangs faced by more than 11 million street children in the largest democracy of the world. Silent Night takes the viewer on a trip around the streets of Calcutta, with one such child, on Christmas eve.