The nadhaswaram legend T. N. Rajarathinam Pillai, a major icon of those times, played an interlude in the movie Rajamukthi (1948), (Hero MKT & Heroine N. Janaki, later MGR’s wife). MGR, then a small time actor himself, was in a support role in this film. The film, made after the prison term of MKT, was shot in Prabhat Studios, Pune as MKT wanted to be away from the film circuit of Madras, in the aftermath of his release from prison. As such most of the technicians were Maharashtrians for this film. However, Rajamukthi, which was come back attempt for his film career, terribly bombed, witnessing MKT’s slide. (By the by, this film was the debut movie for M.L.Vasanthakumari as a playback artiste.)

An ad of the film Kalamegham in Ananda Vikatan Deepavali Malar 1939 PC: From the archives of TCRC

Another leading Nadaswaram vidwan, Namagiripettai Krishnan played off screen, while the credit titles ran on the screen in the movie ‘Town Bus’ (1955) and not the usual film orchestra. It was in the beautiful Raga ‘Mohanam’.

Who can forget the iconic song, “Singara velane deva”, in the combo of S. Janaki’s voice & the Nadaswaram rendition of Karukurichi Arunachalam, another doyen of Nadaswaram world? It would be strange to learn that the full Nadaswaram tune, in AAbheri raga, by Karukuruchi Arunachalam was recorded at Madras for use in the film. On later thought the Director M.V.Raman decided to have also a song sequence using the already recorded Nadhaswaram tune. Then, the high-pitched S. Janaki was commissioned to sing by the Music Director S.M.Subbiah Naidu on the lyrics written to suit the tune. Janak’s vocals were recorded at Raman Studios, Bombay. In those days it was marvel that Sound Recordist Jeeva could manually inter-spread Janaki’s each line of singing to be succeeded by each line of the Nadhaswaram. Bravo on that!

Another song that copiously used Nadhaswaram in a film song was “ Vaaray en thozhi vaarayo” in the film “Pasamalar” by MSV-TKR, for a wedding sequence. It was an amazing blend of Nadaswaram with violins & mandolin in that number. Following this, wherever relevant the Music Directors have used Nadaswaram, such as ‘Oli mayamana ehtir kalam’ in ‘Pachai Vilakku’ (MSV-TKR) and ‘ Nadaswara osaiyile devan vandhu padugiran” in ‘Poovum Pottum’ (Govardhanam).

Song Book of the film Pachai Vilakku PC: From the archives of TCRC

However, when we talk of Nadaswaram with reference to Tamil films, perhaps, the immediate recall reference could be the iconic movie “Thillana Mohanambal”, a romantic story of a Nadaswaram Maestro Sikkil Shanmukhasundaram with a danseuse Mohana, written by Kothamangalam Subbu. The film is full of Nadaswaram music played off screen by the popular Nadaswaram duo M. P. N. Sethuraman and M. P. N. Ponnusamy from Madurai. In this film Sivaji Ganesan has no songs requiring play back support, as all his musical renderings were on the Nadaswaram, played by the duo. 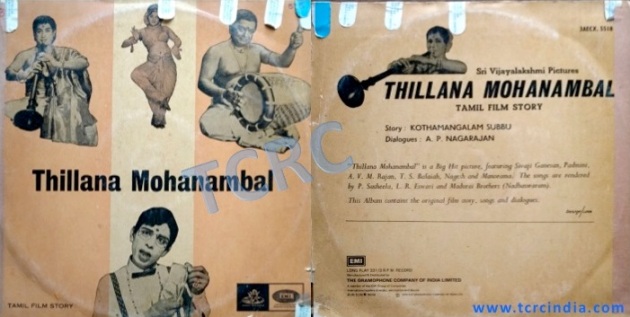 The LP cover of Thillana Mohanambal PC: From the archives of TCRC

Director A.P.Nagarajan who had the opportunity of listening to MPN Bros, at a wedding in Karaikudi suggested them to Sivaji. Soon, the duo was in Chennai for their rehearsals at Music Director K.V.Mahadevan’s studio.

As per the MPN Bros, Sivaji Ganesan listened to them, as they rehearsed for the film, lying on Kannadasan’s lap and earned liberal appreciation from all before Director A.P.Nagarajan confirmed their selection for the film.

Asst.Music Director Pugazhenthi decorated the “Nagumomu” composition of Thyagaraja, a master piece in the film, with incredible sangathis. Impressed by their performance of Muthiah Bhagavathar composed English Notes at the 42nd birthday celebrations of Sivaji Ganesan, APN included that piece too in the film. The MPN Bros recalled that the scintillating ‘Nalandhana’ song took about nine takes.

The body language & acting of Sivaji Ganesan to the playing of Nadaswaram synced so well that nobody believed he was not playing it for real. In fact, when a Russian delegation met Sivaji Ganesan sequel to the film’s release, it was incredible for them to believe that he was only acting and not actually playing!

When the movie was released in 1968 in Madurai, the home town of MPN Bros, the brothers, the seventh generation players in their family, were literally lifted by the crowd for bringing immortal fame to the Temple City.

MPN Bros since played for major VIP functions & every invitation card used to specially feature their names as star attraction. Since Thillana Mohanambal the duo performed in only the film ‘Kovil Pura.’

After that M.P.N. Sethuraman passed away & in a gory accident. M.P.N.Ponnuswamy lost his jaw, besides his wife’s life.