While editing our upcoming Filmy Ripples article – When Film Stars are from the Fauna (which is scheduled for Monday) we were going through our archives to find relevant pictures that could accompany the article.

During our search we came across a gem from our photo archive. Below is the picture. 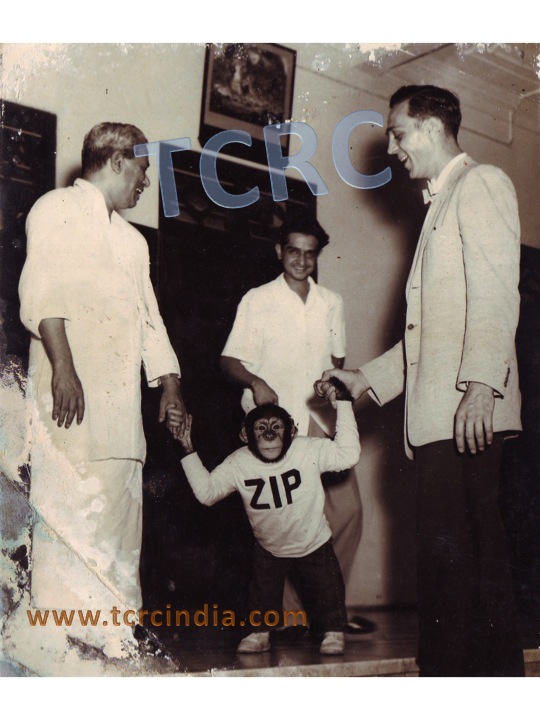 PC: From the archives of TCRC

Our writer of the Filmy Ripples series, P V Gopalakrishnan, confirmed that the above picture was indeed Zippy and SS Vasan most likely taken during the time Zippy was brought down from the USA to Madras for the shoot of the Hindi film Insaniyat.

What is exciting for us at TCRC is that not only does our archive have photos of stars of a bygone era who were not just heroes and heroines but also animals who were stars in their own right like Zippy. Hoping to give our reader more information about the above picture and the people in it, our founder, Sruti had immediately made contact with the eminent writer Ashokamitran last Wednesday.

Mr.Ashokamitran was the PR person at Gemini studios and had written a popular book called ‘My years with the boss at Gemini studios’. In the book he had written the fascinating story about Zippy being brought to India by Vasan to be part of the super hit film Insaniyat.

We couldn’t have asked for a better source to give us more details of the above photograph. He had asked Sruti to come over to his house on Thursday with the photograph.

Sadly we received the news that Mr. Ashokamitran had passed away on Thursday before we could meet him. The passing away of this genius who was one of those rare writers who wrote both in Tamil and English is a great loss for both the literary and the film world.

We at TCRC mourn the death of this great man.

PS: We are still hoping we get more information on the above photo so do pass the word around.