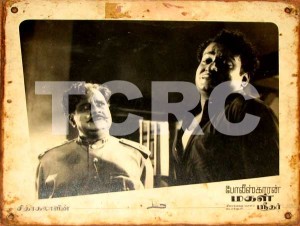 A ‘lobby card’ usually featured an image from the film that was being played at the theatre and was displayed in the glass-pane covered notice boards that characterized the lobbies of most single screen theatres in those days.

This is the lobby card of “Policekaaran Magal,” a successful Tamil film released in 1962.