In this third part on exotic music instruments used in film music in India, we would see few more instruments in this write up.

An unique instrument you used to hear in some songs was ‘Clip Clop’ which essentially had a pair of coconut shells, racing horse-shoe sound when used against a wooden block. In many songs this provided rhythm to the song mimicking the sound by a galloping horse. Listen to ‘Azhagukkum Malarukkum’ from Nenjam Marappathillai in the composition of MSV-TKR.

Then we have the African Drum known as Conga, a tall standing single-headed drum from Cuba, traditionally used in Afro-Cuban genres & Latin music. The film music has routinely used this percussion, to give examples “Vellai pura onru” (Pudhu Kavithai), & “Paadava unthan padalai” (Naan paadum padal), both by Ilayaraja.

Double Bass, an uprightly held huge instrument resembling a giant violin, is played either with a bow or just by plucking the strings. In old Tamil songs these were routinely deployed providing backdrop rhythms as you get to hear in songs such as ‘Envazhvil pudu pathai’ (Bagyalakshmi), ‘Kannale pesi pesi’ (Adutha veettu Penn), ‘Rock n Roll’ (Pathi Bakthi),  ‘Padatha pattellam’ (Veera Thirumagan). But you cant hear this instrument distinctly unless you have a quality speaker set to base amplification. However, Double Bass usage in Tamil film music became rare on the advent of the modern Base Guitar.

‘Ek Tara’ (literally meaning ‘Sole string’ is a rhythm instrument, that used to be carried by sadhus to accompany their renderings, but also used in film music. You can catch the plucking sounds of Ek Tara in ‘Pachai maram onru’ (Ramu), & ‘Kasikku pogum sanyasi’ (Chandrodayam), both by MSV-TKR. 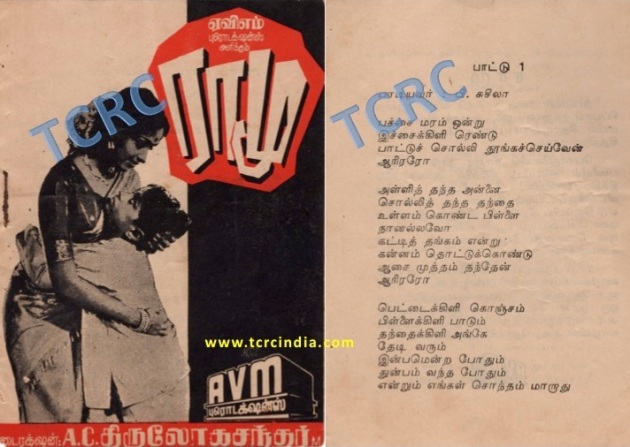 Song book of Ramu with the page containing the song PACHAI MARAM ONRU PC: From the archives of TCRC

Their ensemble had Mr. Sadhan who used to play harmonica.

Harp is a stringed musical instrument that has a number of individual strings running at an angle to its soundboard & the strings are plucked with the fingers. The instrument had great popularity in Europe. In terms of size, while there are smaller harps which can be played on the lap, the larger harps are quite huge & heavy and rest on the floor. The usage of Harp is subtle & is not a main instrument in Tamil songs. You can get the sound bites of a Harp in the opening BGM of  ‘Kodi asainthathum’ (Parthal Pasi Theerum)  by MSV-TKR . Similarly in A.R.Rahman’s ‘Pudhu Vellai mazhai’

Song book of Parthal Pasi Theerum with the pages containing the song KODI ASAINTHATHUM PC: From the archives of TCRC

‘Gangai nadhi oram’ (Varaprasadam) is another example of Harp usage by Govardhanam.

The young Maegan Pandian is a classical Pedal Harp player & here is a video to get an idea of the instrument.

Kanjira is a hand held percussion instrument used in Carnatic Music & played with the palm and fingers of the right hand, while the left hand supports the drum. The fingertips of the left hand is used to bend the pitch by applying pressure near the outer rim.

There are very few film songs, which have used Kanjira. Two songs come to my mind when we talk of Kanjira. One is, ‘Madhar thammai’ (PeNN) in the voice of T.A.Mothi & music of R.Sudarshanam the other is ‘Jeevan ke har mod pe’ (Joota kahin ka) by R.D.Burman.

Morsing (aka Jaw Harp), used as a percussion in Carnatic besides in Rajasthani folk music, is also prevalent in many world cultures. It consists of a metal ring with two parallel forks which form the frame, and a metal tongue in the middle, between the forks, fixed to the ring at one end and free to vibrate at the other. It is held between teeth & played.

MSV had used in many of his compositions to name a few, ‘Ennai yaar enru’ (Palum Pazhamum), ‘Kadhal kadhal enru’ (Utharavinri Ulee Vaa).

Song book of Palum Pazhamum with the page containing the song ENNAI YAAR ENRU PC: From the archives of TCRC

More in my next on Exotic music instruments used in Indian film music.