It is distinctive practice of Tamil Cinema and perhaps to an extent even Malayalam Cinema, to add adjectives to the nouns of its Artistes as ‘titles’, since times immemorial. I do not know about the other regional film Industries of the South. It seems not as widely prevalent in Bollywood either, though there are sporadic references to specific artistes such as “King Khan” or “Big B”, while they are not used as prefixes to the relevant names.

Some of the “titles” that the film industry had given its actors are either in recognition of their fine talents or out of sheer fanciful love & affection to them.

MGR got the ‘title’ of ‘Puratchi Nadigar’ from Karunanidhi in 1952 when the latter presided over a Stage Play of MGR. This title later became ‘Puratchi Thalaivar’, when MGR founded his own party. 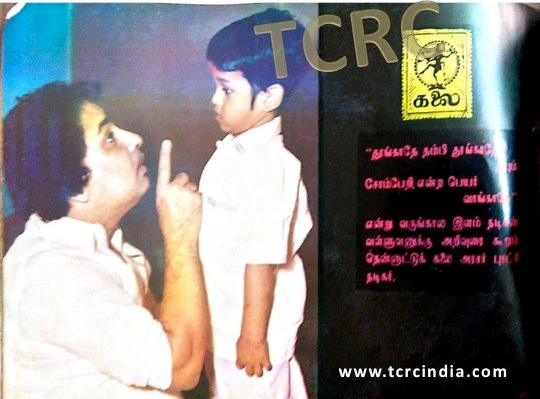 A picture of MGR from the 1959 Deepavali Malar of the magazine Kalai. The write up next to the photo mentions him as ”Puratchi Nadigar”

V.C.Ganesan became ‘Sivaji’ Ganesan when he shot into fame for his role as the Maratha Warrior King Sivaji in a Play penned by C.N.Annadurai. Later, Sivaji Ganesan was given the title “Nadigar Thilakam” in 1957, by the reputed ‘Pesum Padam’ film magazine & it was in the credit titles of ‘Ambikapathi’ film, released the same year, that his new title was first ever featured. 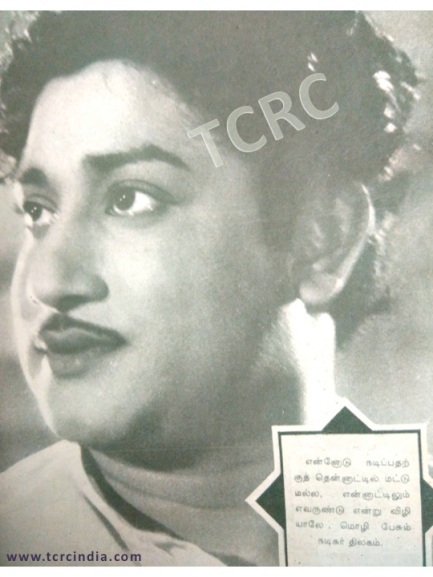 Sivaji Ganesan mentioned as Nadigar Thilagam in the 1959 Deepavali Malar of the magazine Kalai.

The prefixes such as ‘Sivaji’ (Ganesan) or ‘Bharath’ (Mamooty) to certain leading stars were rather ‘earned’ titles bestowed upon them by respectable institutions or the Government.

Gemini Ganesan acquired the prefix ‘Gemini’ in his name, owing to his earlier career as a Casting Director in Gemini Studios. He was later referred as ‘Kadhal Mannan’, a fond title given by his fans for his impeccable romantic roles.

Similarly, titles such as ‘Ulaga Nayakan’ (Kamal), ‘thala’ (Ajit), ‘ILaya thaLapathi’ (Vijay),  were conferred by their passionate fans, in decorating them affectionately.

Though such decorating titles were not as common for female actors, there were, of course, ‘Punnagai arasi’ (K.R.Vijaya), ‘Abhinaya Saraswathi’ (Saroja Devi), “Nadigaiyar thilakam” (Savithri), “Nattiya PerolI” (Padmini) and the like for a chosen few, based on certain USPs. 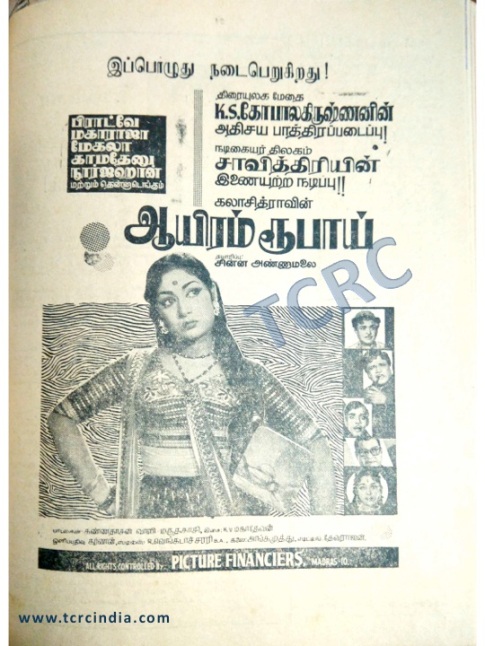 An ad for the film Ayiram Rubai from the December1964 issue of Naradar. Here Savithiti is mentioned as Nadigar Thilakam.

In 1963, the duo MSV-TKR was conferred the title ‘Mellisai Mannargal’, suggested by Kannadasan & conferred by Sivaji Ganesan at a star-studded function organized by Triplicane Cultural Academy at NKT Kala Mandapam, Triplicane. ‘Chithralaya’ Gopu, who a close pal of MSV, was instrumental in organizing the event, which was majorly supported by ’The Hindu’ newspaper.

Sometimes, adding a prefix (aka ‘title’) to an actor’s name was necessary in avoiding comedy of errors. In the bygone era of Tamil films, we had “Friend” Ramasami, “PuLimoottai” Ramasami,  “K.R” Ramasami, “V.K” Ramasami each ‘title’ making them distinct with their own ‘brand equity’ and avoiding the potential confusion as to which ‘Ramasami’ one is talking about. If two Gopus were there, one had to carry the ‘title’ of ‘typist’ while the other carried the prefix of ‘Chthralaya’. If Ganesans had to be distinct, one had to be ‘Gemini’ & the other had to be ‘Sivaji’. When two Balachanders were there, not withstanding their different time frames, their names were always referred with their initials & one was S.Balachandar & the other K.Balachander. The Varalakshmis were distinguished whether she was ‘S’ or ‘G’!

Some ‘titles’ of actors were linked to a character they had earlier played or the film in which they were debuted. Some of the actors who went by the names of movies that brought them to fore are ‘Vennira Aadai Murthy, ‘Nizhalgal’ Ravi, “Pasi” Narayanan, ‘Jayam’ Ravi & ‘Vietnam Veedu’ Sundaram. ‘Chiyaan’ Vikram was named so after the character he had played in the film ‘Sethu’ that made him a star.

Such practice extended to even stage artistes, as in, ‘Nawab’ Rajamanickam, ‘Cho’ Ramaswamy, ‘Kathadi’ Ramamurthy, ‘Typist’ Gopu etc. referring to their memorable characters in some play.

Some became eternally iconic abbreviations like ‘MGR’, ‘MKT’ or ‘MSV’, which were Brands by themselves.

Some, preferred to be identified with the names of their native place such as “Pattukottai” Kalyanasundaram, “Kothamangalam” Subbu, “Kovai’ Chezhiyan.

For a chosen few only assumed names gave them recognition & reputation, like in ‘Kannadasan’ or ‘Vaali’.

After all, the individual actors or other film artistes are individually selling themselves as a product in a stiffly competitive industry called cinema. This makes a valid reason and absolute justification for such distinctive ‘titles’, as they constitute their market capitalization, in a way.