The voices of M.K.Thyagaraja Bhagavathar & Dhandapani Desikar need special mention here. The former was a Super Star of his time, with innumerable renderings to his credit, since his debut in ‘Pavalakodi’ in 1934. Half of his fourteen films were run away hits. His 1944 movie ‘Haridas’ ran for three years at Broadway Theatre, Madras. His well known songs include  “Amba Manam Kanindhu”, “Soppana Vazhvil Makizhndu”, “Sathva Guna Bodhan”, “Krishna Mukunda Murari”, “Radhe Unaku Kobam Aagadadi”,  “Vasantha Ruthu” and more. Convicted in Lakshmikanthan murder case, he later died after his release when he was just forty nine. 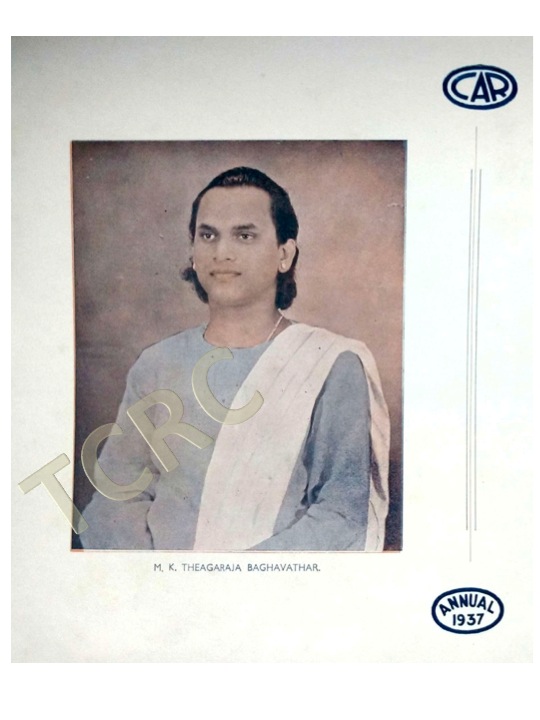 A photo of a young M K Thyagaraja Bagavathar in the 1937 edition of Cine Art Review Magazine. PC: From the archives of TCRC

Here is the visual of the ever green song ‘Vasantha Ruthu’by MKT in the film Sivakavi (1942).

M.M.Dandapani Desikar was a great musicologist & composer. Songs such as ‘Jagat Janani’, ‘Inba kanavonru kanden, ”Thamarai pootha’ composed by him are hugely popular. His singing prowess was evident in ‘Nandanar’ (1942) produced by Gemini was a musical treatise, as he sang the compositions of Gopalakrishna Bharathi & Papanasam Sivan. Desikar also served as the HOD of Music Department of Annamalai University. 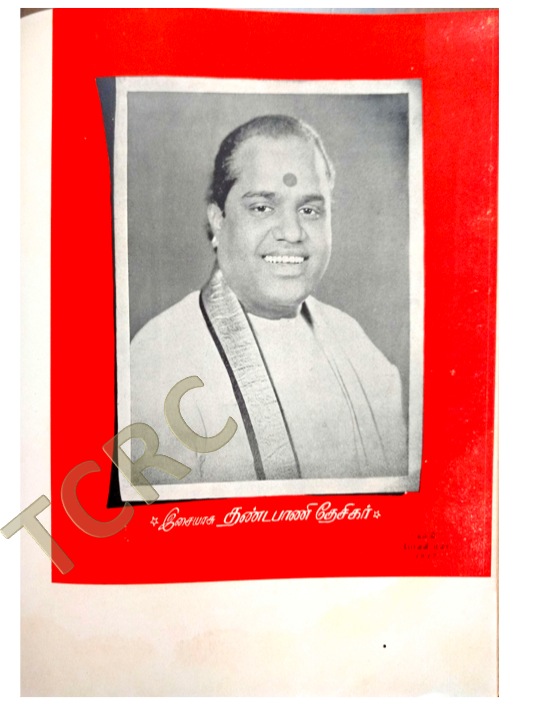 A photo of Dandapani Desikar from 1942 Kalki Deepavali Malar. PC: From the archives of TCRC

The below video features Sivan’s Composition Pirava Varam (from the film Nandanar) set in the unusual Lathangi raga, which is now a concert regular. The singer was MM.Dandapani Desikar

There was another singing star in the forties by name V.V.Sadagopan. He was a man of many parts, by being a university rank-holder, ICS aspirant, film actor, music teacher, performer and composer.  He was a disciple of Ariyakudi Ramanuja Iyengar & Professor of Music in Delhi University till 1975. However, he went missing since he got off a train at Gudur in 1980, on his way from Delhi to Chennai. Since that none has information about him.

M.L.Vasanthakumari was in the top amongst playback artistes of those times. In ‘Krishna Bhakti’ she even appeared on screen, rendering ‘Enta Veduko’ in a concert scene. N.S. Krishnan produced ‘Manamagal’ gave her the all-time hits ‘Ellam Inba Mayam’ and ‘Chinnanchiru kiliye’, which are being sung even by the kids in Super Singer reality show. There were many other memorable numbers of MLV such as ‘Konjum Purave’.

J.P.Chandrababu was a versatile actor-singer of his own unique style.  He had an unique voice. In AVM’s ‘PeNN’ (1954) he even sang ‘Kalyanam..haha..kalyanam’ for S.Balachander, the actor-director-veena maestro. There are many memorable songs of Chandrababu to name a few: ‘Pambara kannale’, ‘Naan oru muttalunga’, ‘sollurathe sollipurren’, ‘Jolly life’, ‘Budhiyulla manithar ellam’. In fact his entry into the filmdom was very dramatic. While fishing for a film role, his life took through struggles leading to utter frustration that he attempted suicide in the premises of Gemini Studio in 1952, having failed to meet S.S.Vasan. Later, when Vasan came to know of this episode he gave him  a small role in the film Moonru Pillaigal. Chandrababu rose to become a sought after artiste that in the film, ‘Sabhash Meena’ he commanded a remuneration that brushed past that of his co star Sivaji Ganesan. But in his later days he was broke and died penniless! This writer has seen him walking the Dr.Rangachari Road in his lesser fortunate days.

There were many other formidable ghost voices of those times which deserve detailing here. But for want of space in this write up we are constrained in not dealing with them. This does not in any way undermine their mighty contribution to Indian Tamil film music.

The magic of pre sixties’ Tamil film music, till recently, were available only on those old vinyl records. Now that the technology has brought them to us through other music formats, there no stopping to patronise these classic gems.

National award winning director Manohar, discusses his short film ‘Post man’ during the Shamiana short film screening with TCRC hosted by Ashvita Bistro. The film maker brings to light the issues he faced during the making of his debut film, how the film finally proved to be commercially viable and much more.