If you have found yourself listening to old Tamil film music and felt like you attain absolute ecstasy from the mosaic of sounds that the blend of various musical instruments produced, pleasing your eardrums, we know exactly how you felt!

From traditional Indian instruments to the exotic instruments from various parts of the globe, the music composers of Tamil screen composed their lilting music. In fact, by virtue of music composers like A. R. Rahman having become a global player, such globalization in music has brought some very exotic musical instruments such as Balalaika, Cajon, Harpejji etc to our door step.

The track record of Tamil film music goes much beyond the music directors & playback artistes who literally lived them. The immaculate talents of extremely talented musicians, who never were known to the listeners at large, deserved the credit of the lively compositions we cherish even to-date. The fruits of their creativity is an ever lasting a gift to the current & future generations of music-lovers.

In order that we appreciate those highly talented music makers of the Tamil screen, we must know about the various musical instruments they used in their breezy compositions, under the direction of music directors.

Here in this Article, we will have a ringside view of the various musical cine-orchestral music instruments along with links to videos and songs wherein these were used, particularly in Tamil films till the early seventies. However, we will eschew Accordion since we have already devoted a special Article on that.

In old Tamil films the organs used to produce musical notes similar to the mighty church organs. Since then the organs have gone through a long history of evolving & development resulting in today’s one-man orchestra provided by the modern electronic keyboards.

Listen to ‘Ennai alum Mary matha’ by P.Leela from Missiyamma (1955), in the composition of veteran S. Rajeswara Rao, where the beginning music is of the organ.

These are wind instruments using enclosed reeds, fed from a ‘bag’, which acts as the reservoir of air. The player keeps pumping air orally into the ‘bag’ as he plays. So, the difference between any wind instrument & bagpipe is that unlike the other wind instruments which are blown into with air directly from the player’s lungs, bagpipes receive air first into its bag from where it goes to the pipes. Though Bagpipe is predominantly seen as a Scottish instrument, bagpipes have been played for over a millennium throughout other large parts of the West.

I have not come across a bagpipe being used in any Tamil film songs. Though someone said, it has been used by K.V.Mahadevan in the song ‘Thottu vida thottuvida thodarum’, on a careful listening, I find, the bits resembling Bagpipes are in fact produced by the Organ of those times known as Univox.

As far as my information goes, Bagpipes were used only in the Raj Kapoor film Sangam (Music by Shankar Jaikishen) in the song ‘Bol Radha Bol Sangam’.

A plucked stringed instrument, which originated in Africa & got adopted in the country music of USA.  Banjo had not been very widely used in Tamil film music but there are specific songs where this has been used. For instance, MSV-TKR had used Banjo in few of their compositions & the one we have here for citing is ‘Ennathan nadakkum nadakkattume’, from ‘Pana Thottam’ (1963), where the string instrument you hear is a Banjo.

Song book of Pana Thottam with the page containing the song ENNATHAN NADAKKUM NADAKATTUME    PC: From the archives of TCRC

These are Afro-Cuban percussion instruments consisting of a pair of small, open bottomed drums of different sizes & played by fingers & palm.

Indian films till the sixties used this percussion instrument very frequently in the compositions. In fact instruments such as Accordion, Bongos & Mandolin ruled the roost In Tamil film compositions prior to seventies but became slowly extinct as there was a paradigm shift to the music genre & compositions. MSV-TKR had used Bongos in very many memorable songs. Ganesh (of Shankar-Ganesh Duo) who was a formidable member of MSV’s orchestra played Bongos.

Here is ‘Pesuvathu kiliya’ from Deiva Thai, composed by MSV-TKR with the Bongo beats.

In ‘Silai eduthan oru china pennukku’ (Server Sundaram) too you get to hear percussion beats of Bongos. 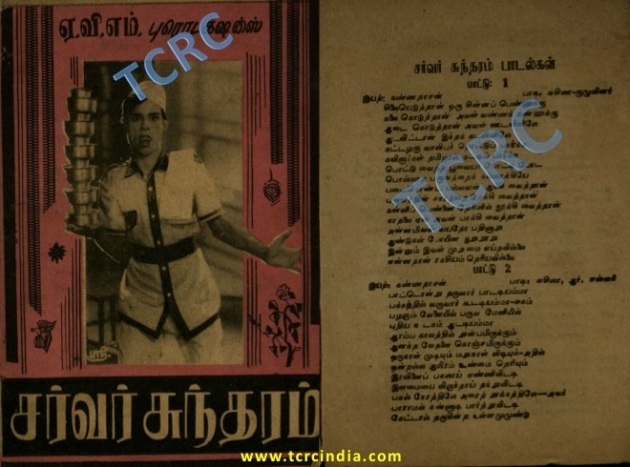 Song book of Server Sundaram with the page containing the song SILAI EDUTHAN ORU CHINNA PENNUKKU     PC: From the archives of TCRC

These are rhythmic percussion instrument comprising of a pair of concave shells joined on one edge by a string, originating from Turkey. O.P.Nayyar had used it often in his compositions. It is a hand held instrument used to produce clicks for rhythmic accents or a ripping or rattling sound consisting of a rapid series of clicks.

Here is a Tamil composition by MSV-TKR in the song ‘Pillaikku thanthai oruvan’ from ‘ Parthal Pasi Theerum’ (1962)., where you can hear the rhythmic wooden clap sounds produced by Castanets.

You can spot castanets in few other Tamil songs too such as ‘Kelvi piranthathu anru’ (Pachai Vilakku), the music director being MSV-TKR.

Song book of Pachai vilakku with the page containing the song KELVI PIRANTHATHU ANDRU     PC: From the archives of TCRC

It is a four stringed bass instrument originated from Italy in 17th century, looking like a giant violin (held while playing against the seated cellist and traditionally played with a horsehair bow), has been used routinely in many Tamil Film Songs. However, due to its ‘Bass’ tone structure it has a low tonal registry & may not be heard separately unless played singly in the songs.

In ‘Enge nimmadhi’ song  (‘Puthiya Paravai’ – 1963) too, one can distinctly hear Cello in the opening music just prior to the vocal of TMS.

A typically six stringed instrument with European roots with a multitude of incarnations from acoustic to electric, has featured commonly in many film songs.

Tamil Cinema has had amazing Guitarists such as Dhanraj Master, Philip, Ilayaraja, Chandrasekhar, Gangai Amaran & R.Visweswaran.  Of these, the last named late Visweswaran (husband of danseuse Chithra Visweswaran) was a close friend & college-mate of this writer. Visweswaran himself was an expert Guitarist who could play Flamenco genre music & had played for R.D.Burman.

In an Article by V. Balasubramanian titled “Harmony with strings” in The Hindu dated 27.4.2014, the author wrote “MSV during his heydays was a hard taskmaster who would leave no stone unturned till he gets what he wanted. During a particular recording, that started at 7 a.m, the work went on till next day morning. Philips pleaded with MSV to let him go but in vain. Finally, when it was pack up, Philips had to rush directly from the recording studio to the church where his wedding was to take place.“ This writer has had the opportunity of meeting this genius along with R.Visweswaran in early sixties.

“Ilaiya nila pozhigirathu” (Payanangal Mudivathillai) composed by Ilayaraja & rendered by SPB has ample guitar bits, played by Guitarist Chandrasekhar. As per an Interview by SPB, Ilayaraja had well over twenty retakes to get the Guitarist play those difficult Flamenco Notes to his full satisfaction. The results were obvious in the song!

We will continue discussing more of the exotic musical instruments used in our films in our next posting.