The Great Poet Mahakavi Subramanya Bharathiyar lived his times in utter poverty & died unsung in his times. When one reads his poems the reader is sure to experience goose bumps! Such a spirited Poet that he was, his untimely death in 1921 at a very young age of thirty nine, drew only a handful of mourners in his funeral procession!

He is, perhaps, the first ever Poet to have has the honour of being named a ‘National Poet’, that too posthumously! This happened in 1949 after our Indian Independence.

Sequel to the death of Bharathi, his widow Chellammal along with Bharathi’s two daughters, Thangammal & Sakunthala, compelled by their utter poverty, were constrained to relinquish the rights over Bharathi’s works by selling them to AVM for a sum of Rupees Nine thousand five hundred (then a princely sum). AVM have used many of the Bharathi poems in their Tamil films, which became very widely popular.

However, over a process that lasted over five years from 1944 to 1949, the then Government of Madras nationalized the works of Bharathi in 1949, through the offices of four Chief Ministers. Prior to that though there were many notable voices that strongly demanded such nationalization of Bharath’s works, it was during the term of Omandur Ramasamy Reddiyar as Chief Minister it materialized finally. However, it was only by 1955, the works of Bharathi reached public domain when the then Finance Minister C. Subramaniam announced the decision of allowing all to publish Bharathi’s works.

However, unintentional of the Great Poet Bharathi, some of his beautiful poems later turned into film songs, set to mellifluous music compositions by noted Music Directors & rendered by top Artistes in various time frames.

The most recent songs that captured our attention was in the Tamil Film ‘Bharathi’ (2000), wherein Sayaji Shinde portrayed Bharathi. This biographical film on Bharathi had the lilting music of Isai Gnani ILayaraja & delivered few of his poems.

But, going back in time travel, very many films have had Bharathiyar written songs used in various filmy sequences. It all started with AVM who pioneered the way to copiously use Bharathi songs in his films (as he held recording rights for the songs) such as Naam Iruvar (1947), Vedhala Ulagam (1948) & Vazhkkai (1949), all in the amazing music compositions of Sudarsanam. In fact even today, these songs are known in these very tunes that Sudarsanam composed them in.

An advertisement of the Film Naam Iruvar from the magazine PESUM PADAM July 1946 PC: From the archives of TCRC

In ‘Kappalottiya Thamizhan’ some of Bharathiyar’s compositions were featured, in various voices.

To my knowledge, nearly forty songs have been featured in Tamil films, in various situations, which I have enlisted below.  However, there could be few more in addition to my list.

Here below we are giving links to some of the videos containing Bharathiyar songs in films.

Song book of Thirumanam with the page containing the song MANGIYATHOR NILAVINILE PC: From the archives of TCRC 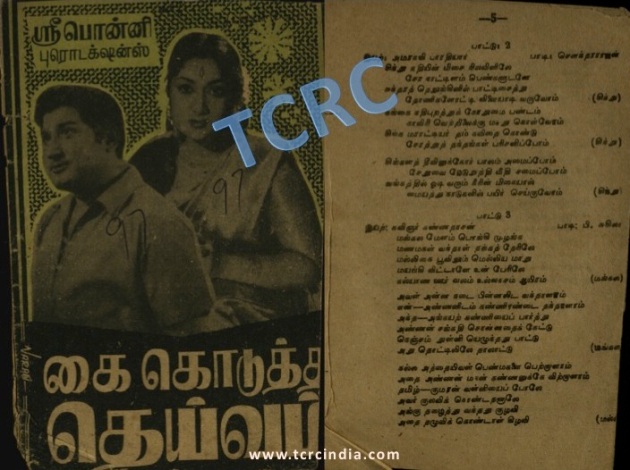 Song book of Kai Kodutha Deivam with the page containing the song SINDHU NADHIYIN PC: From the archives of TCRC

Song book of Naam Iruvar with the page containing the song AADUVOME PALLU PC: From the archives of TCRC

These days, you hardly get to hear Bharathi’s lyrics in Tamil films. For that matter, you hardly even make out what the lyrics are, in most songs. Those were the times when lyrical beauty held a song close to your heart. This is the reason as to why we can still remember the words of the old film music. Gone are those days, now rhythm & tune override lyrics and if at all one could make them out in the whole din, they cannot live in your memory.