By P.V.Gopalakrishnan
The movies always began after ‘The News Reel’ of the Information & Broadcasting Ministry of the government.
Whenever a song sequence came in the movie the audience fled out to have a soda or smoke or to relieve themselves!
In the very few theatres that were air conditioned in those days, after the first reel was screened, the operator used to quietly switch off the a/c. In those times the word consumerism was unknown and none batted an eyelid at such practice!
On the metal backs of the seats you would find creative engravings by the ‘learned’ audience. In some seats the sponge was found scooped out by some disgruntled theatre goers. The washrooms had a mixed stink of phenyl and human fluids while their walls bore unsharable graffitis.
But the audience inside these halls, with high ceilings sporting sporadic ceiling fans, lived the movies with their favourite chocolate faced Heroes and buxom Heroines.
When Srinivasa Kalyanam was released in Maharani Theatre, in the front foyer a Tirupathi Balaji was installed. On the release of Marma Manithan, cycle rikshaw men were dressed like that character a la style Mr.X, as they distributed fliers about the movie. 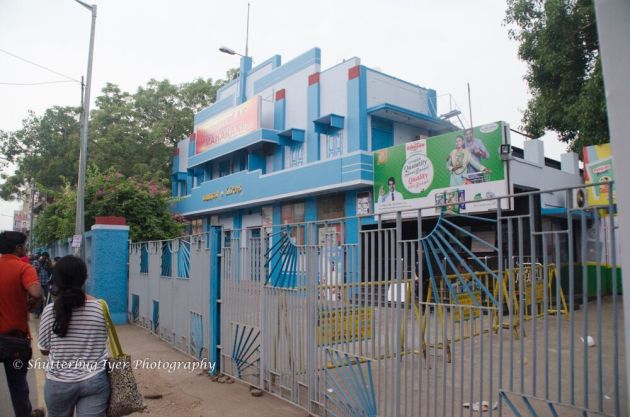 One of the oldest theatres of Madras was Murugan Talkies. It was originally started in 1910 by one Murugesa Mudaliyar as Majestic Theatre where Tamil Plays happened.
This was later converted to a cinema hall. In 1931, Majestic’s name was changed to “Kinema Central” ,  where the first Indian talkie film “Alam Ara” was screened, with People coming by road and rail, packing food,  to watch the first talkie. This theatre also saw the screening of the first “Tamil-Telugu” Talkie ‘Kalidasa’. Classics like Meera, Shakunthala , Avvaiyaar , Uththama Puthiran, Sathi Leelavathi , Thyagabhoomi, Ambikapathy , Thiruneelakantar, Ashokkumar ran at  Kinema Central.The theatre’s name was changed as Murugan Talkies in 1942.This iconic cinema hall was pulled down a couple of years ago, after 80 years.

Then the new air-conditioned cinemas such as Safire & Anand came right on Mount Road.
Safire was a pioneer featuring multiscreen complex. It had screens named Safire, Emerald & Blue Diamond. Its Blue Diamond cinema ran continuous shows, where one could buy a ticket and enter the theatre in the middle of a screening and continue to stay as long as one wanted, as the movie was screened non stop, back to back. Safire complex opened with the iconic 70MM movie ‘Cleopatra’, followed by Battle of the Bulge, Mutiny on the Bounty, South Pacific – all in mammoth 70MM. The Safire Complex also had the first ever Disco of Madras, named Nine Gems. It even had a restaurant serving Rajasthani culinary. When ever I pass by, these days, the bush grown compound where once Safire complex stood proudly on the Mount Road, I feel both melancholic & nostalgic.The Anand Theatre owned by an influential Congressman Umapathi had its mammoth electric screen raise before each movie projection started, revealing the silver screen, to the accompaniment of Spanish Gypsy tune, which, by the by, also inspired MSV to compose ‘Thulluvatho Ilamai’.

Then came the Pilot Theatre in late sixties at Royapettah, started by Mr. Sanjeevi of Pilot Pen Company, with Cine Rama technology.

Pilot theatre in the process of being demolished on Feb 9th 2017 PC: Srinivasa Ramanujam

This is the anthology to the current generation of cinema halls, which are cartelised screens in corporate run set-ups, such as PVR & Inox, with plush seatings, comfy air-conditioning with snacks served at your seat, if you had pre booked them.
PVR which spearheaded multiplexes across India was a JV by the Indian film distributor Priya Exhibitors and Australian Media company Village Roadshow, from which first letters P-V-R, their multiplexes are known now.
Movies are an experience, indeed, whether in sixties or now.