In this concluding part on the above caption, we would strive to feature & discuss about some more of the exotic musical instruments used in our film music.

Trumpet is another popular wind instrument to form a part of the Brass Section of an orchestra, which has been in use in Indian films for a long time.

MSV-TKR has used Trumpet bits in many of his compositions, notables of which include ‘Thulluvatho ilamai’, ‘Adho andha paravai pola’ & ‘Unnai onru ketpen’.

Kishore Sodha has been a reputed trumpet player in Bollywood since 1978 and had worked for composers such as R.D Burman, Kalyanji-Anandji, Bappi Lahiri, Anu Malik, Laxmikant-Pyarelal, Anand-Milind, Shankar-Ehsaan-Loy and more.  His first song on trumpet accompaniment was ‘Rote Hue Aate Hain Sab’ (Muqaddar Ka Sikandar).

The Trumpet is also used placing a ‘mute’ in its ‘bell’ portion so that the sound emanates from there in a muted form. If you hear ‘Maan kanda sorgangal’ from ‘47 Naatkal’, composed by MSV, there are notes from a muted trumpet throughout. The following video explains about a muted trumpet.

Saxophone is an amazing wind instrument, grouped again under Brass Section in Western Orchestra. It was invented in 1840 by the Belgian instrument maker Adolphe Sax, after whom it is named.

Sax, as it is called in short form, it has been used in many compositions such as ‘Unnai onru ketpen’ (Puthiya Paravai) composed by MSV-TKR, ‘Ammamma keladi thozhi’ (Karuppu panam) by MSV-TKR & ‘Vannam konda vennilave’ (Sigaram) composed & sung by SPB. 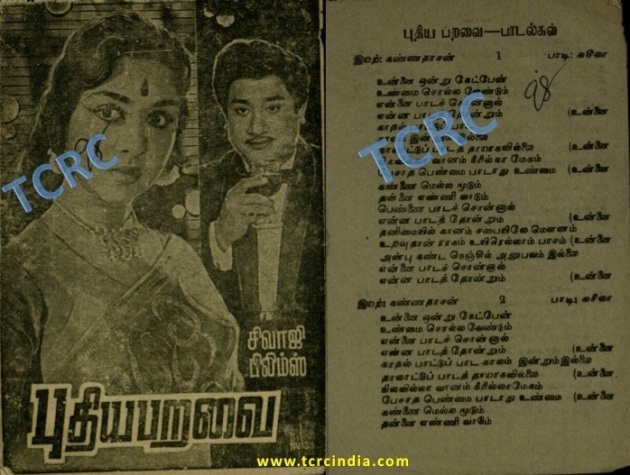 Song book of Puthiya Paravai with the page containing the song UNNAI ONRU KETPEN  PC: From the archives of TCRC

When we talk of Sax in film music, we cannot but mention the late Manohari Singh, a Sax wizard of Nepali  origin, who had played for leading Hindi composers in immortal songs such as ‘Gatha Rahe mera dil’ (Guide) by Sachin Dev Burman & Yeh Duniya usiki (Kashmir ki kali) by O.P.Nayyar.

Another beautiful composition of S.D.Burman featuring Sax was ‘Oh mere jeevan sathi’ from the movie ‘Guide’.

In the film ‘Duet’, A.R.Rahman had the classical sax player, Mr. Kadri Gopalnath, to play through the film. This film, in fact, popularized this instrument.

Trombone is a Brass wind Instrument, the sound of which is produced when the player’s vibrating lips cause the air column vibrate inside the instrument, having a telescoping slide mechanism that varies the length of the instrument to change the pitch.

While Trombone is usually played in Brass bands – accompanying the main theme by giving punching phrases, the potential of this instrument to perform as solo cannot be undermined.

Here is a piece on Trombone playing Michael Jackson’s ‘Thriller’.

In Indian films’ BGM scores, Trombone is usually played together with other brass instruments. They have had limited scope as a solo in the interludes of movie songs.

Song book of Pattanathil Bhootham with the page containing the song ULAGATHIL SIRANTHATHU ETHU PC: From the archives of TCRC

You can rarely hear Oud in Tamil film music.  Ilayaraja’s ‘Matha un kovilil’ from ‘Achani’ (1978) had distinct Oud usage along with Bells in its BGM. Another good usage could be spotted in the A.R.Rahman composed song from ‘Ravanan’

Song book of Achani with the page containing the song MATHA UN KOVILIL PC: From the archives of TCRC

Maraca is a rhythm instrument of Mexican origin used in Latin American & Rumba music. It is a humble instrument originally made out of gourd shell.

We can spot the rhythmic sounds of Maraca in many film songs if we very carefully listen, but often it gets submerged in the BGM in most of the songs. Here we have selected a Hindi song, ‘Mujhe duniya wale’ by Mohd. Rafi from the film ‘Leader’ (1964) in the music composition of Naushad Ali, where one can make out the ‘chik-chik’ notes raised by Maraca in rhythmic pattern.

R.D.Burman was the pioneering Music Composer to use it in Indian film music when he used it in the poular song ‘Samne wali kidki pe’ from ‘Padosan’. It features very prominently in the song when Keshto Mukherji enacts with a broom, in the early part of the song.

Another exotic but humble instrument called ‘Elathalam’ is a Clash Cymbal used in Temple Music in Kerala. It is a pair of heavy brass cymbals played with one held firmly & the other clashed with it rhythmically.

A.R.Rahman has creatively used it in the song, “Narumugaiye” in the movie ‘Iruvar’. You can hear this bit in the said song when the visual of the hero & heroine appear in the waterfalls sequence.

In our 5th & concluding part of ‘Exotic Instruments in Film music’ next week, we would look at few more of the instruments used in film music.