Film lyrics could be anything these days, for the lyrics are ever drowned in the racy BGM that appeals to the foot-tapping dance, resulting in the loss of intrinsic value of the songwriter. Even a decade or so back the situation was not this pathetic.

But the old movie lyrics stood out as the music was conducive to the words of the lyricist. In fact, many songs of the yesteryears are remembered to date by their evergreen lyrics.

Old songs often carried messages, useful to the community at large; And when these songs were delivered by the larger than life Stars of those times, they had an immaculate impact on the cine goers.

N.S.Krishnan used to convey messages for the society through his comic coated songs always in the lyrics of Udumalai Narayana Kavi. One such was ‘Vatham vambu panna koodathu’ from the film “Dr.Savithri” (1955). The song, composed by Music Director G.Ramanathan, was directed as advice to married women, though not very relevant to the current generation, manifesting Bharathiyar’s ‘pudumai penn’!

In the bygone days, children had reverence for parents almost bordering on a fringe of fear about them. They were taught too that parents & teachers were equivalent to almighty. The values were different then.  Generations have since changed when most parents now have a single child or two to whom they afford the best in life & the children too, in turn, move with them more like a demanding friend. That reverential gap has since evaporated. Here is an old time’s song ‘Matha pitha guru deivam’ from ‘Naan petra selvam’ (1956), in the voice of A.P.Komala, the music being by G.Ramanathan.”

‘Aadi paadi velai senja’ from ‘Enga Veettu Mahalakshmi’ (1957), in the music of Master Venu, brings out the sterling fact that work done without pressure becomes a pleasure. The same has been recognized by mighty organizations that even play piped music to increase the productivity of its workers in shop floors as well as offices. The humble agrarian workers, labourers drawing mighty loads & hard sailing fisher folk – all of them – resort to singing in order to lighten their work strain. The modern housewives, whenever they have to cook in the kitchen or drive to work naturally resort to their favourite FM! The singers of the subject were Ghantasala & P.Suseela and the lyricist was Udumalai Narayanakavi. 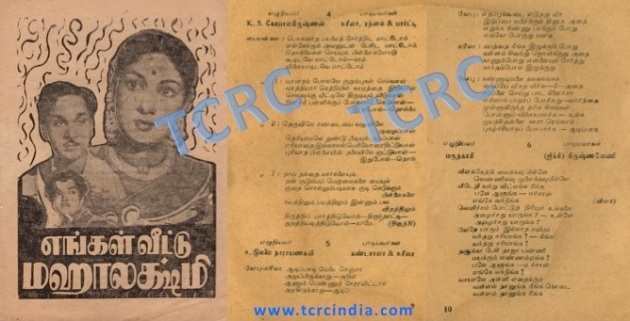 Song book of Enga Veettu Mahalakshmi with the pages containing the song AADI PAADI VELAI SENJA PC: From the archives of TCRC

‘Sinthanai sei maname’ was an iconic song advising minds to have balanced views to get rid of evils. Sung by TMS, it was from ‘Ambikapathi’ (1957), produced by ALS Productions. The musical treatise was by G.Ramanathan’ & the lyricist was K.D.santhanam.

The innumerable instances where the alcoholics bring misery to their household, especially to the wives, have been the subjects of many films with a social cause. The film ‘Anbu Engey’ (1958) had a beautiful song with such a message ‘Ethanai kodi panam irunthalum’ in the pristine voice of P.Suseela. The music was by Vedha on the lines of Kannadasan.

‘Aathile thanni vara’ by Sirgazhi featured in modern Theatre’s ‘Vanna Kili’ (1959) in the lyrics of Maruthakasi & set to music by K.V.Mahadevan.’ Life has plentiful surprises both pleasant and otherwise. These have no explanations, which makes life unique. This has been the subject of this song. 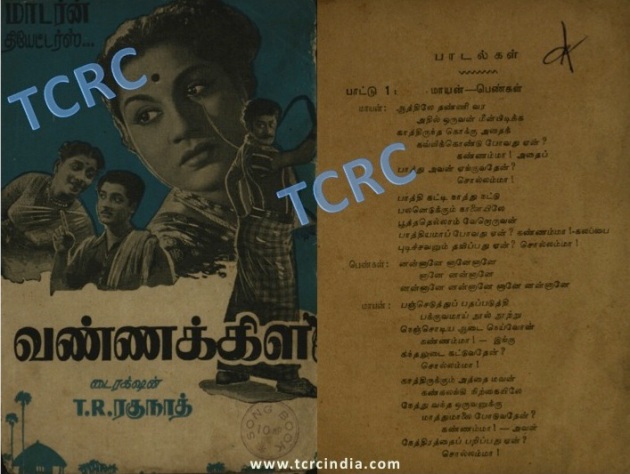 Song book of Vannakili with the page containing the song AATHILE THANNI VARA PC: From the archives of TCRC

The songs in MGR starred movies used to carry lot of messages. One such was ‘Chinna payale’ from the Jupiter’s film ‘Arasilamkumari’ (1961) in the lyrics of the inimitable Pattukottai Kalyanasundaram, who died very young. He was an understudy of Poet Bharathi Dasan. The song gives Do’s & Don’ts to the child to whom it is addressed. The music was by G.Ramanathan.

Another character building song directed at kids was ‘Thirudathe papa thirudathe’ from the MGR film ‘Thirudathe’ (1961) in the voice of TMS, while S.M.Subbiah Naidu scored the music on the lyrics of Pattukottai Kalyanasundaram.

‘Engalukkum kalam varum’ was an inspirational duet song, by P.Suseela & TMS, etched in Positive Thinking from the iconic movie ‘Pasa Malar’ (1961), Kannadasan holding the fort for its lyrics. MSV-TKR composed the music.

‘Budhiulla manithar ellam’ rendered by Chandrababu from the AVM produced film ‘Annai’ (1962) had the music of Sudarsanam. The song illustrates the vagaries of life where cohesive things always do not exist.

Often film makers used to have off-screen songs which practice has dwindled over the time. One such song ‘Mayakkama kalakkama’, was very touchingly rendered by P.B.Srinivas in Sridhar directed ‘Sumai Thangi’ (1962) in the lyrics of Kannadasan.  The lyrics are just beautiful and about resolving mind games by lateral thoughts.

‘Dharmam thalai kakkum’, written by Kannadasan &  sung by TMS, was the Title Song of the Sandow Chinnappa Devar produced film of the same name, starred by MGR, who doles out a message with a song even as he drives. This movie of 1963 was given music by K.V.Mahadevan. The nobility associated with charity is highlighted to the masses by the song.

Money has overtaken the principles of life in today’s life. It is only increasing its velocity of such rate of overtaking over the years. ‘Kurangu varum thottamadi’ in the voice of TMS from the G.N.Velumani produced film ‘Panathottam’ (1963) vividly portrays this status. Music composed by MSV-TKR, this song has the golden words of lyricist Kannadasan.

Though all such songs as featured above must be appealing to listen even now, such genre has lost connect in today’s terms, with the current mass scale departure from what were routinely advocated & accepted things in the past.  Thanks to cultural change!