Music in a movie has so many sectionalized areas such as composing, arranging, conducting, re-recording etc. which are all attended to by different dedicated professionals in Hollywood. Whereas, largely, it is a one-man show, in the context of our movies where it is the responsibility of one individual, called “Music Director”, who is usually a brand name by himself, though he might have umpteen musicians specialized in some aspect or other, ably supporting him informally!

Often the Music Directors have strong lieutenants who are well versed in trained classical music to assist them, such as the late Pugazhenthi (of late K.V.Mahadevan).

We have, in the present days, a huge flock of Music Directors with their own creative talents. In stark contrast to this there were relatively few Music Directors in the past. However, those times, most of them were very strong in classical base, particularly in Carnatic Music. People like, Papanasam Sivan, C.R.Subburaman, G.Ramanathan, T.R.Pappa, S.M.Subbiah Naidu, Sudarsanam, M.D.Parthasarathi, Emani Sankara Sastri, Rajeswara Rao, Master Venu, S.V.Venkatraman and many more stood tall amongst the film music makers. Most of them have spent long internships with senior music directors of their times, worked alongside with them under their supervision and had learnt the ropes. They gave us outstanding music, which have withstood the efflux of time! In this context of comparison, the current music scenario seems a large departure.

There have been Tamil films with countless number of songs per movie. But you also had the AVM produced, S.Balachandar directed, thriller movie “Andha NaaL” devoid of any songs whatsoever, but with only background score.

Even in those days, with abundantly talented Music Directors around, there were films, which openly plagiarized western tunes or Hindi film music. These could have been plainly due to compulsion from the Producers or Directors. Or even introducing a new genre to cine goers as a marketing tool. After all, mimicking is a form of compliment to the original!

For instance, the AVM film ‘Oar Iravu’ (1951) had a hit song rendered by MLV, “Ayya Sami” under the baton of Music Director Sudarsanam. This song was based on the Hindi song “Gore Gore” from the film ‘Samadhi’, which was in turn based on the Latin American song “Chico Chico”, from the film “Cuban Pete”!

‘Kalyana Samayal Sadam’song from “Maya Bazaar” was inspired by the laugh tracks of the song “Laughing Samba”. 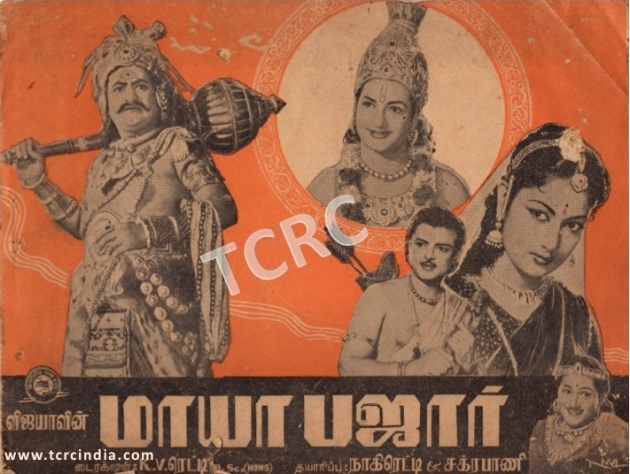 Song Book of Maya Bazaar PC: From the archives of TCRC

I have read somewhere that some moviemakers in that era handed down a bunch of Western/Hindi film records to the prospective Music Director and advised them to adopt or at least adapt the tunes.

Other than such dubbed versions, we have umpteen carbon copies of Hindi tunes.

In  ‘Avan Amaran’ (1958), Music Director T.M.Ibrahim set tune to the song sung by Sirgazhi & A.P.Komala, “Kalana minjathayya”, which was a carbon copy of from a popular Hindi tune “Ramayya Vastavayya” from Raj Kapoor’s Shri.420.

In fact one more song “Vaan mathi nee arivay” in the same film was also carbon copy of “Jaye to Jaye kahaan” rendered by Talat mehmood for Devanand in film Taxi Driver.

Another Tamil number sung by Jikki in the music of G.Ramanathan from ‘Komathiyin kadhalan’ (1955), produced by T.R.Ramachandran,“anaganai nikartha azhagan”, which was a straight lift of the very popular Hindi song of Music Director C.Ramchandra’s composition “dekh tere sansar kitna badal gaya Insaan” from the movie “Nastik” (1954).

G.Ramanathan was otherwise a very respected Music Director of repute, for his very popularly melodic carnatic based tunes.

Our highlighting such outright adoption of the then existing Hindi tunes is not to put down the concerned Music Director. This is simply to highlight a timeframe, in the anthology of Tamil film music, when such plagiarism was sometime routinely in vogue. If the Producer & Director insisted on copying an already popular tune those poor Music Directors never had a way out!

“Konjum Purave” by MLV was a clone of ‘Thandi Hawaain’ by Lata Mangeshkar, set to music by the legend S.D.Burman in the film ‘Naujawan’ (1951). The very same tune was lifted in Tamil film “Thai Ullam” (1952) as “Konjuum Purave”. Nevertheless the Tamil version became a huge hit, owing to the lovely tune as well as the silky voice of MLV. I remember having heard this song, as a child, being played all over in Madras, in the fifties. The music score was duo V.Nagaiah & Ramachandra Rao. Coming to the song, the “Konjum Purave” opens with the First violinst to the slow humming of MLV to the backdrop of vibrafone, but quickly transforms into a quick-beated foot tapper with its Dholak percussion . The intermittent BGM brings back the first Violinist’s melancholic strains before MLV goes on to her fast pace. Whereas S.D.Burman’s BGM arrangement is uniquely different, with Hawain Guitar for interludes in place of the Tamil version’s Violin. The young Lataji’s voice is more delicate than that of MLV.

M.S.Rajeswari rendered “Enni Enni Parkum Manam Inbam Kondaduthae”, composed by R. Sudarsanam. The identical tune was used in the song “Chup Chup Khade Ho Tho” sung by Lata under the baton of the duo Husnlal-Bhagatram, in the Hindi Film Badi Behen released in the same year. While Vazhkai was remade in Hindi only in 1951 as Bahaar, in which Vyjayanthimala made her debut Hindi films, it is not clear as to which version of the tune was the original.

Another interesting info: The Jewish Music Research Centre, Israel has published a CD containing the rare Jewish songs in Malayalam language representing the Jewish tradition that was in Kochi from where a lot of Malayali Jews migrated to Israel. One of the Malayalam songs in such CD “Enni enni tirttu dinam”  – a Zionist song celebrating the Israeli independence from British, has been set to the tune of “Enni enni parkkum manam”.

Much later, Music Director Vedha was known in using popular Hindi tunes in his songs. His song “Oho ethanai azhagu irubathu vayathinile’ from Athey Kangal reminded you of ‘Pedal Pushers’ by Ventures.  Occasionally you could see even MSV using tunes from overseas in his songs. “Anubavam pudumai’ in Kathalikka Neramillai was based on Italian melody “Besame Mucho”. Puthiya Paravai’s ‘Partha gnabagam illaiyo’ reminded the American tune ”Sway with me”.

Even R.D.Burman’s ‘ Mil Gaya’ was a total lift from ABBA’s  “Mama Mia”. Shankar-Ganesh’s ‘Megame Megame’ too was a replay of the tune from a Ghazal by Jagjit Singh.

For change there was also reverse copying, the popular American Hip Hop Band, “Black eyed Peas” took portions of Ilayaraja’s  “Unakkum enakkum anandam” by S.Janaki from ‘Sri Raghavendra’ and mixed it with one of their songs.

There have been Tamil film songs, which were kept as they were with little or no changes when the original Tamil movies were remade in Hindi. The instances are “Ilaya Nila” of Ilayaraja from Payanangal Mudivathillai was largely the same in Kalakar in the music of Kalyanji Anandji. “Muthu kulikka vaareegala” of MSV from “Anubhavi Raja Anubhavi” was retained by R.D.Burman in “Dho Phool”.

Adapting good musical notes from unknown cultures and blending it to our own music genres is after all is a creative service, I would personally opine. The outright lifting also perhaps served the same in times when Tamil films were not quite ‘connected’ with other languages and cultures, though within the country.

Ultimately, all songs have to be within the parameters of the seven musical notes, “Sa Re Ga Ma Pa Da Ni”!